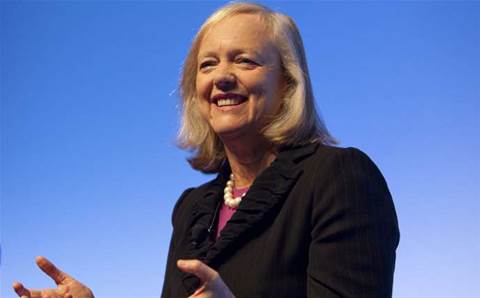 "Public cloud infrastructure helps grow our TAM (total addressable market), but it does put some pressure on our margins," said Whitman. "We continue to manage this dynamic through business model evolution and cost structure improvements."

Whitman's comments come with public cloud market leader Amazon Web Services (AWS), which has a revenue run rate of nearly US$12 billion, reporting a whopping 58 percent increase in sales to US$2.88 billion for the second quarter ended 30 June with operating margins of 30 percent.

With a full year contribution from both spin-ins, HPE expects combined fiscal year 2017 sales to be flat to down one percent when adjusted for divestitures and currency with non-GAAP earnings per share of US$2 to US$2.10 with a non-GAAP operating margin of 9.5 percent. HPE shares were up Wednesday 31 cents or one percent to US$21.79 following the analyst meeting.

Whitman said HPE is seeing lots of customers scale up with a public cloud and then make the decision to move to an HPE private cloud that delivers "public cloud economics in a private, on-premise solution" that provides the added benefits of "control, customisation and security."

Earlier this year, HPE singled out a breakthrough deal that led Dropbox to move some of its huge cloud storage services from Amazon Web Services (AWS) to a scalable HPE cloud solution.

Dropbox moved to a hybrid cloud model designed by HPE - an "open architecture approach and a custom server solution" with HPE ProLiant and Cloudline service provider solutions - all financed by HPE Financial Services.

Whitman said there are now a number of financial services companies that are now getting AWS economics with on-premises cloud solutions. "I am not saying that is going to stop (the public cloud) the trend by any stretch of the imagination, but there are now options that we have to present to customers that we didn't have a number of years ago," she said.

HPE enterprise group executive vice president Antonio Neri, for his part, said the average selling price of HPE servers in the enterprise is rising "quite significantly"  in the current market environment because of HPE's success in optimising systems for specific workloads. "That is why we see our revenue profit share going up versus some of the other vendors," he said.

Whitman said there is also a big market opportunity to sell infrastructure to the public cloud and SaaS vendors - who currently only account for 10 percent of infrastructure sales. "That leaves very attractive segments with higher margins where HPE has leadership positions and growth opportunities," she said.

"Segments like high performance compute, private cloud, all flash arrays, next generation software defined networking and converged infrastructure are all strong. They are strong and they are growing markets where HPE is very, very well positioned."

The key for HPE, said Whitman, is to make sure it is the "leader in private cloud, on-prem,  with public cloud economics, that we enable a multicloud hybrid IT environment, which I think is absolutely the reality, and then exploit those new pockets of growth - whether it is software defined or the intelligent edge."

With its Aruba networking business, HP is also aggressively moving to capture a US$23 billion "intelligent edge" campus and branch market growing at two to four percent each year, said Whitman. That intelligent edge opportunity also opens the door to a new market – converged infrastructure for the edge – which will power the emerging US$14 billion industrial internet of things applications growing at about 15 percent a year, said Whitman.

"We play in healthy markets that are growing and we are well aligned to address them," she said. "Our strategy is tied to what our customers tell us they want: so we are focused on four transformation areas that define the IT challenges faced by our customers: transform to a hybrid infrastructure, help our customers protect their digital enterprise, empower the data driven organization and finally enable workplace productivity."

Whitman reaffirmed HPE partner commitment in the wake of the US$8.8 billion spin-in merger of its software assets with Micro Focus in September and the blockbuster deal to spin-merge its US$20 billion enterprise services business with systems integration giant CSC in May, creating a US$26 billion independent services powerhouse.

"We'll continue our focus on the channel," Whitman told analysts. "With the spin-merge of ES (Enterprise Services) and Software our partner ecosystem will continue to broaden even further and partners will remain at the center of our multicloud strategy."

HPE's spin in mergers has also will create a flatter organisation making employees "more accountable for the work they do," said Whitman. "We will continue to make HPE a workplace of choice for existing and new talent."

HPE CFO Tim Stonesifer reaffirmed HPE's fiscal year 2016 outlook with sales growth of one to two percent over fiscal year 2015 and with non-GAAP earnings per share of US$1.90 to US$1.95 - the high end of HPE's original outlook for the year.

Whitman said the new HPE, with US$5.3 billion in cash, translates to a more attractive company for investors with an "improved financial profile with higher revenue growth and operating margins" with operating profit composed of more than 60 percent recurring revenue. HPE shares were up 53 cents or two percent to US$22 in after-hours trading.

"Our strong balance sheet will enable significant shareholder returns and disciplined investments," said Whitman. "One thing you can count on is the new Hewlett Packard Enterprise will invest in the innovation, the solutions and the go-to-market resources necessary to grow and win."