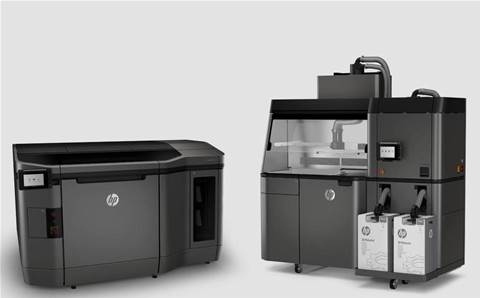 HP Inc is getting ready to take a major step toward its goal of democratising 3D print, with the forthcoming launch of four new Jet Fusion 3D printer models.

The 300 series and 500 series models feature the same technology of the original 4210/4200 models, but with a smaller footprint and lower cost in order to reach a broader set of customers. HP is also launching a separate channel program for the smaller Jet Fusion 3D printers that doesn't require partners to provide servicing.

The new models will be available in the second half of 2018, and interest from channel partners is "very high," said Alex Monino, HP's vice president of global strategy and business management for 3D printing. "We get a lot of calls, a lot of interest. But really we're making sure people understand that this is not just adding another SKU to your PC portfolio that you have."

Monino sat down with CRN USA during this week's HP Global Innovation Summit 2018, held outside Barcelona at HP's 3D technologies hub in Sant Cugat, to discuss the new Jet Fusion models and talk about plans for the company's first metal objects printer. What follows is an edited portion of the conversation.

The intent is to have a lower entry, both in terms of price point and physical requirements, in order to get closer to the designers. So when there are organisations doing design, they could benefit from having this technology closer to the designers. And then one of the benefits is that the output is exactly the same [as the larger models]. Obviously the lower-end has the ability to do colour - we don't have color yet in this higher end. But the mechanical properties of the parts will be the same.

That means you're designing and prototyping a technology, and you're qualifying and developing a process that you don't need to re-qualify for manufacturing. You just transfer to the same basic technology in a more industrial [deployment], which would be the 4200/4210. It basically enables you to design, prototype and manufacture in the same technology, which has a lot of advantages.

Are there any updates in terms of the partner recruitment you're doing for that?

We are recruiting and training channel [partners] as we speak. You'll see with the 300/500 series that we're expanding the type of channel that we had until now. In order to sell the 4200 or 4210, it requires a very specialised type of channel.

The 300/500 series will be a very specialised channel as well, but we're lowering the requirements. For instance, we're investing in HP support, which means we will enable partners with the 300/500 series to not have to invest in support capabilities to be able to make this technology available to their customers. So that means we will get a wider network of partners, including from the traditional HP partners - some of the big players like Insight or ASI in the US And also partners that are very specialised on software, like SolidWorks, Siemens and NX partners.

Are you seeing as much interest from partners as you were expecting?

It's very high. It's a hyped industry, and everybody wants to get into it. We get a lot of calls, a lot of interest. But really we're making sure people understand that this is not just adding another SKU to your PC portfolio that you have. This requires a group of dedicated salespeople that are specially trained. It requires some technical [know-how] - there will be questions that a superficial sales rep will not be able to answer.

You need a level of deep technical engineering in order to have a meaningful discussion with them - and to know the right materials, what mechanical properties this is going to have, what the accuracy is that I can achieve. It's not something that just a regular reseller selling PCs can handle. They can make a plan to handle it -- that's why we're working with them. But it's not something that you just add a different SKU to the portfolio.

What other things do you most want IT partners to know about the opportunity with the 300 and 500 series?

One is, if they have access to engineering teams - they sell into segments where they have access to designers and engineering teams - we will have programs to enable them to play with a significantly low investment. They will have to make a plan. So for instance, the IT partners we're looking at, they basically are creating a small 3D printing or additive manufacturing group within their organisation that will be focused on this. So you have the focus, but then you leverage from the generalists that will have a wide-ranging customer base.

Do you have a target number of partners you're looking at for this?

We don't really. One of our principles is we don't want to over-distribute. We want people to be successful. So we have what we call selected distribution. But as long as there is demand, I don't have a limitation on the number of partners. I do want to protect the partners' investments, so once they invest, I don't want to have 10 partners in a city if there is not demand for 10.

How does the focus on selling to engineers make this a different product for some parts of the channel?

Well for instance, with the workstation channel, we're proving that it can be successful and driving that. We're [already] selling workstations to engineering teams. The types of sales capability that's needed is not only sales and explaining a product. You need some sort of consultancy - we call it application engineering - so you basically need to consult and be able to sell and understand the customer application, what the customer is trying to do. And then convey the benefits of the technology. And sometimes you will get to the point where the technology is not right for what you're trying to do. And we need to be able to convey that to customers, and identify that with customers early on in the sales process so we don't lose time. So that requires a different type of sale, which is more of a technical skills sale, more than a transactional sale.

How can going into metal expand the 3D print opportunity for HP?

There are a lot of things [created] with metal, that if you really design it properly, you can do it with plastics. And there are others where you will need a metal technology. We will announce our metal technology this year, later this year. It will be a separate machine.

The metals market is smaller, but it's used for final part manufacturing. Because especially for complex parts, with the metals manufacturing process, doing complex parts at a strength is tougher. So you see a lot more final parts. But if you really design properly, you can design parts that have historically done with metals, with plastics successfully, and it gives you much more flexibility.

It's a key market. Today, there are many [3D print] providers that don't have a metal offering. But we feel that if we really want to be in the manufacturing industry, and provide end-to-end [coverage], metals is a key part of the portfolio.

We did not enter into plastics until we felt we had something disruptive. The same is going to apply to everything we do with metal. One of things with the [3D printing] metal technologies is that they're super-slow. So the productivity is not there yet in metal.

You've had some big gains on reaching cost-parity with injection molding on the Multi-Jet Fusion printers. Can those gains continue at that pace?

Yes. I think [Jet Fusion general manager] Ramon [Pastor] talked about the six levers of manufacturing adoption - one of them being materials breadth. Another one is material cost. It's the same for additive - there are these six levers of adoption.

Material cost is very important, because if you look at manufacturing in high volumes, we're not going to pay more for a product just because it's 3D printed. We see ourselves pushing the break-even further and further away. And you can do that with a combination of productivity, cost - there are different levers you can push.

Yes. Replace is a big word, because there will be volumes that will always make sense to injection mold. But basically our strategy is to displace a lot of the injection molding where it makes sense.

Grow your software revenue by selling these 5 affordable, essential tools for the modern workplace
By Kyle Alspach
May 28 2018
3:03PM