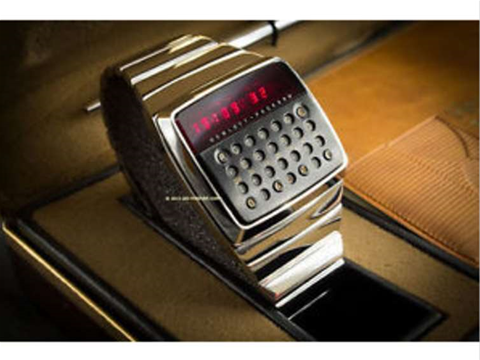 If you are hungry for HP's upcoming smartwatch and want to get your hands a piece of their wearable tech ahead of time, there's an eBay seller in Spain who can help you out.

For a mere $14,500, you can get your hands on a prototype of the company's first ever wearable device.

Dubbed the HP-01, the watch features cutting edge technology for the time of its development.

Unfortunately, the time of its development was 1977 and it's, basically, a wearable calculator.

While we think $14,500 thousand is a little steep for a calculator watch, the device was quite ahead of its time. The HP Museum of Calculators – yes, that really is a thing – describes it as "a marvel of miniaturisation and intelligent design".

The device combined the technologies of the wristwatch and the calculator into a single interface, although it wasn't necessarily that user friendly. For example, if a user wanted to change time zone, they would bring up the time on the display and then add or subtract hours accordingly.

It was also waterproof under very specific conditions – it could withstand being submerged to a depth of 10 metres, but only for five minutes and only if the water was 25⁰C.

Back to the future

Things have moved on rather a lot in the past 40 years, but HP hasn't given up on its smartwatch dream.

The company is confirmed to have partnered with American retailer Gilt to create a new, rather more elegant looking wearable, which will go on sale this autumn.

The device, which was designed by luxury menswear designer Michael Bastian, features a round face with metallic edging and black wristband, which appears to be plastic or rubber, rather than leather.