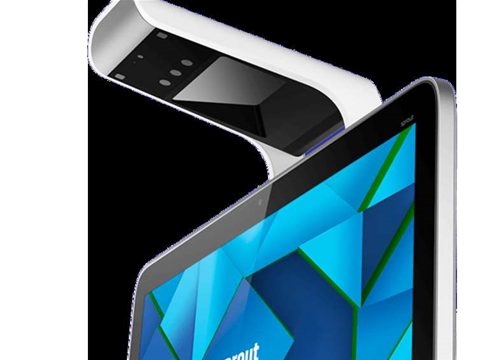 It's a desktop with a full HD touchscreen, as well as a projector and 3D camera. That means you scan in a 3D object, and then manipulate it on screen or 3D print it, and interact with projects and apps with your hands, rather than a mouse, by moving your hands or a stylus underneath the depth camera.

Sprout also allows collaboration: users can video conference on the main display and then interact with the same document – whether it’s photos or spreadsheets – on the “canvas” in front of the machine. If you’re still a fan of keyboards, you can project one onto the canvas – or take a break with piano keys.

It’s not only the hardware: HP has also made its own software, and already has apps from Evernote, Microsoft Office, Skype and more.

“The technology here will be extended to new form factors – mobile form factors and others,” said Ron Coughlin, senior vice president of imaging and printing.

It runs an Intel fourth-gen Core i7 chip, has 8GB of RAM, 1TB of storage, and a 1920x1080 touchscreen display. It uses an Intel RealSense camera and also has a 14.6-megapixel scanner.

HP said it would go on sale in the US for US$1,899 on 9 November on BestBuy and Microsoft Stores, but only in limited locations. Australian availability wasn’t known at the time of publishing, but HP said it would eventually roll out to other countries.

Watch an HP video about Sprout below: