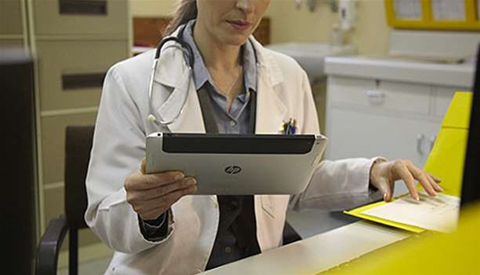 An unknown tablet device has appeared in a promotional photo on HP’s website, hinting that a new line of HP tablets, likely running Windows 8, are on their way.

HP has made no secret of its plans to launch tablets running Microsoft’s next-generation operating system.

It announced early last month its first Windows 8 tablet will be an x86 model aimed at businesses, and said it is looking at making ARM tablets running Windows RT.

The device pictured on its website appears identical to one which popped up in a promotional video two weeks ago.

As reported by Engadget, a similar-looking tablet is shown at the end of HP's 60-second "make it matter" commercial. Earlier this year, rumours emerged HP was working on its Slate 8, an x86-powered tablet with a 10.1-inch screen.

The tablet shown in the video and photo aligns with reports of the Slate 8’s design, boasting a metallic body with black antenna section for 3G/4G capability. The tablet has been reported to be 9.2mm thick with up to 10 hours battery life.

The tablet is pictured with a medical professional, hinting that the device will be business-focused rather than consumer-targeted.

In May at HP's global influencer summit in Shanghai, Todd Bradley, executive vice president of HP's printing and personal systems group, said some of HP's Windows 8 tablets would be targeted at the consumer market.

"Our stated tablet strategy is around Microsoft and bringing Windows 8 tablets to market. … That's not to say that [the Microsoft partnership] is forever -- markets evolve."

HP killed off its consumer TouchPad tablet worldwide in August of last year, less than a week after it debuted in Australia, after failing to light sales and win over critics.

The device ran on HP’s own WebOS operating system, developed out of its Palm unit and based on Linux. The TouchPad came with a dual-core 1.2GHz Qualcomm CPU, 1GB of RAM, beats by Dr Dre stereo sound, 16 to 32GB of storage and a 9.7in HD screen (1024x768).

The future of WebOS looked uncertain in the months following the TouchPad’s demise, with reports HP was looking to sell it off, but the company early this year announced plans to release the full open-source version of the operating system in September.

Cloud application revenue made easy
By Allie Coyne
Aug 7 2012
9:57AM