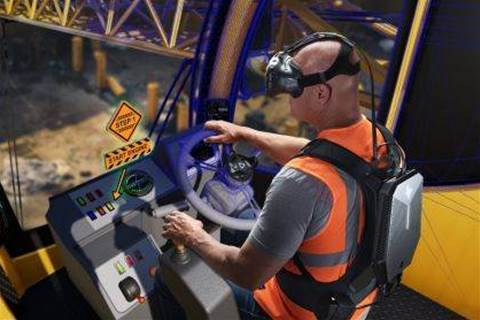 The Z VR Backpack should allow workers to train in a variety of environments via the HTC Vive Business Edition or other hardware such as the Oculus Rift. The wearable is untethered and its docking solution allows users to easily transition between desktop and VR mode, HP said.

As for specs, it's not messing around. The backpack meets military-grade drop, dust and water resistance standards, and sports a VPro-enabled quad Core i7, Quadro P5200 graphics, and 16GB of video memory.

"Virtual reality is changing the way people learn, communicate and create," said Xavier Garcia, vice president and general manager at Z Workstations. "Making the most of this technology requires a collaborative relationship between customers and partners. As a leader in technology, HP is uniting powerful commercial VR solutions, including new products like the HP Z VR Backpack, with customer needs to empower VR experiences our customers can use today to reinvent the future."

The VR market has so far been very focused on entertainment and its significant implications for the future of gaming, but the potential applications in other areas - such as product design, architecture, healthcare, first responder training and automation - are vast.

To show off what the product could potentially do, HP has partnered with companies such as Autodesk, Epic Games, Fusion, HTC, Launch Forth and Technicolour for Mars Home Planet - a project that will offer a global collaboration experience using its VR technology.

The description on the website reads: "Welcome to the next giant leap for humankind. We invite you to join us for HP Mars Home Planet: a universe-changing design, architecture, engineering and virtual reality project for the imaginative problem solvers and technology enthusiasts of tomorrow."

"In 2016, we conquered the International Space Station with our HP ZBook Workstations, powered by NVIDIA Quadro graphics, and now we have our sights set on Mars," said Josh Peterson, vice president of product management for workstations at HP. "Through HP and partner technology, we are unleashing engineers, architects, designers and students to help anticipate and solve the real world problems we'll face to inhabit Mars one day."

You can join the mission yourself by signing up at hp.com/go/mars.