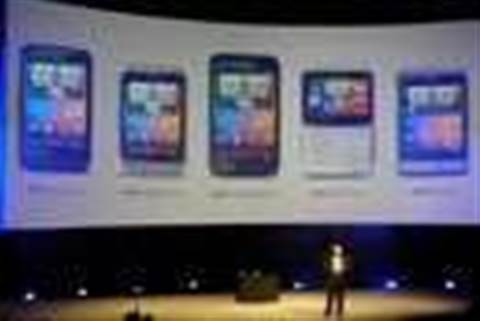 HTC has unveiled a number of new devices – including its first ever tablet – at this year’s Mobile World Congress (MWC).

Peter Chou, the company's chief executive, took to the stage to unveil the tablet and five new smartphones, claiming HTC was “providing different choices [with] the broadest range of phones we have ever announced at one time.”

The biggest announcement came in the form of the HTC Flyer, the company’s tablet device.

The seven inch device ran on a re-worked version of Google’s Android 2.3 mobile operating system in order to incorporate HTC’s Sense user interface, which had been tweaked for tablet use.

It contained a 1.5GHz Qualcomm processor, 32GB of internal storage and 1GB of RAM. There was a front facing 1.3 megapixel camera for video calling, along with a back-mounted five megapixel camera with autofocus.

However, it lacked full sized USB ports or HDMI connections, which might disappoint some business users.

Built-in software functions may prove more impressive. TimeMark was a note taking technology that allowed users to record meetings whilst taking notes. Users could then return to specific points in the recording by clicking on the written notes using HTC Scribe. The pen-shaped device also enabled users to make annotations of their documents and create time stamps for easy reference at a later date.

Anything created using TimeMark could then be synchronised with the popular cloud application EverNote to allow documents to be shared easily between colleagues.

HTC also updated a number of its flagship devices to incorporate enhanced functionality and a few new features.

The Desire S came with a 3.7in touch screen and was moulded from a single piece of aluminium.

It will be available exclusively in Australia on Telstra's network, sometime in the first half of this year. Pricing was not disclosed.

The device was loaded with Qualcomm’s latest 1GHz SnapDragon processor and would run on Google’s Gingerbread operating system, along with an updated HTC Sense UI.

There was also a front facing camera to accompany the back-mounted five megapixel one, enabling video calling from the handset.

HTC has also upped the internal storage, a big drawback of the original Desire handset, to 1.1GB.

The Incredible S has a more artistic design, which its makers claimed meant it “looked like it had been dipped in paint.”

A four inch super LCD screen and surround sound enabled users to watch HD quality video on the move. It also came with an eight megapixel camera so users could shoot HD videos and pictures.

Again, it features a 1GHz processor, 1.1GB of internal storage and runs on Android Gingerbread, but offers a different feel to the Desire design.

The last of the three updates came in the shape of the Wildfire S.

The more budget smartphone in the range was given a boost in quality, mostly thanks to the increase in screen resolution – up to 320 x 480 – which was twice that of the previous model.

The lower grade 600GHz processor and 512MB of storage was likely to be reflected by the price but there were three colours available.

Rumours of Facebook phones had been circling for sometime and these seem to be two of the first on the market.

A message from Mark Zuckerberg, CEO of the social networking giant, played at the press conference assured attendees this was no exclusive deal and just deeper integration into the platform but the prototype shown on screen was impressive.