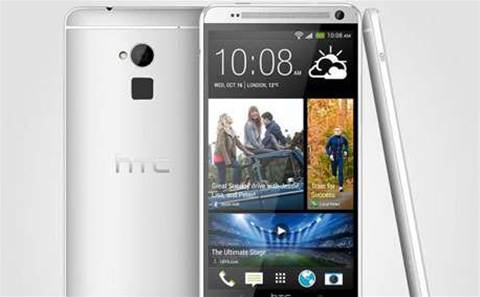 The HTC One Max has arrived, a 5.9in smartphone with a Full HD screen and a fingerprint scanner.

Bigger screen aside, the HTC One Max features minimal hardware upgrades, with a 1.7GHz Snapdragon 600 processor, 2GB of RAM and either 16GB of 32GB of internal storage. Unlike the HTC One, though, that's expandable via a micro SD slot. There's also a 3,300mAh embedded battery. Finally, there's an optional 50GB of free Google Drive storage available for two years.

The phone's other eye-catching feature is its fingerprint reader. The HTC One Max is the second smartphone this year with a fingerprint sensor, after Apple's iPhone 5s. HTC's put the scanner on the back of the device rather than the home button, however.

On top of this, there's the same 4-megapixel rear camera and 2.1-megapixel front snapper. The phone supports NFC and LTE and will run on Android 4.3 Jelly Bean.

HTC said the phone will go on sale around the world from this week, but hasn't revealed a price.