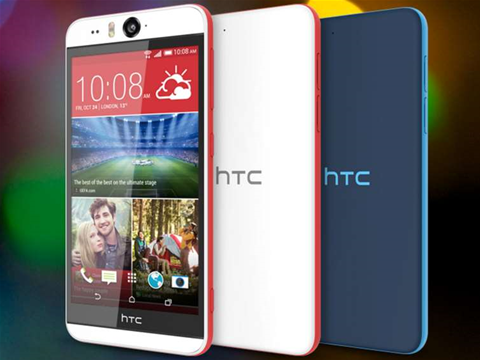 HTC has finally unveiled the next smartphone in its Desire range, the HTC Desire Eye, as well as a GoPro rival, the HTC Re.

From the specs revealed last night, it seems the new smartphone isn't called the "Eye" for nothing, either. The phone features not one but two 13-megapixel cameras, one front, one back, and each has a dual LED flash and microphone.

Naturally, HTC is pitching it as the ideal phone for the selfie generation (Where have we heard that before?).

Other specs include a 5.2in full HD LCD screen, BoomSound speakers, and is able to withstand being submerged in 1m of water for half an hour.

Inside, it has 16GB of built-in storage, which can be expanded up to 128GB by microSD, is powered by a 2GB Qualcomm Snapdragon 801 chipset and runs on Android 4.4 KitKat.

In terms of connectivity, it is LTE, Bluetooth 4.0, and dual-band Wi-Fi enabled, and also has a micro-USB port.

The phone is expected to cost between $550 and $750 and be available some time in late October or early November, although no official release date has been given.

Up periscope! Introducing the HTC Re

Alongside the HTC Desire Eye, the company also unveiled a new, rather quirky looking camera, which is being tipped as a rival to GoPro.

There's no other way to describe it - the HTC Re, as it has been called, looks like a tiny periscope.

Available in four colours, the Re is designed to stop you from missing out on important events because you're recording them, rather than experiencing them in the moment.

How does it achieve this goal? Well it has no screen. At all.

Instead, it connects with your smartphone via Bluetooth and then relays data back to the special Re app via Wi-Fi Direct. All media is also stored on a microSD card and it comes complete with an 8GB one.

The camera has a single large, silver button on the top, which is used both to capture photos, using a short press, and videos, using a longer press.

HTC re also has a 820mAh rechargeable battery, which the company claims can take 1,200 16-megapixel photos, or record about 90 minutes of footage.

7 steps to MSP success: from pricing to specialisation
By Jane McCallion
Oct 12 2014
3:21PM