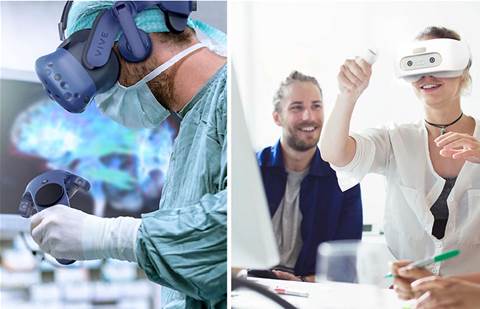 HTC Vive wants to get virtual reality into the hands of more Australian corporates, and that means new partnerships are likely on the way.

A kick-off of its reinvigorated enterprise drive came when Vive launched Sync, a VR meeting and collaboration platform aimed at corporates, earlier this year. Since then the vendor’s local leadership has been hosting staff, press and partner meetings in VR frequently over the past couple of months. CRN documented the experience in a recent comment piece.

“Obviously the distribution and channel strategy we’ve had up until now was very focused on B2C, facilitated by some of the big retailers and some of the resellers we have in each state,” he said.

“Some of them are already doing a lot of work in the B2B side of things, they are already selling into the enterprise. With those, we are going to make sure we start going after joint opportunities. We’re going to start working closer on lead registration with our existing channel.

“But obviously as we are realigning our focus towards the enterprise side of things, we are also developing a strategy with other partners who are not yet part of the picture who can bring new expertise.

“The challenge for us in the next few months is to identify the right partners. Everyone wants to embrace VR in some way shape or form but we have to see who would be the best partner. At the end of the day, we’ll do a much better job if we’re selling an end-to-end turnkey solution."

Dexmier said Vive was generating leads in verticals across healthcare, construction, manufacturing, design, real estate, all of which are common adopters globally.

“Some of these new customers have brought conversations about adopting VR forward due to the COVID-19 situation. I think not everyone was anticipating they would be ready to do a digital transformation around VR this early, and we know it’s still early days,” Dexmier said.

At the local level, Vive sees mining as another specific niche where training and other simulations could be conducted.

“The amount of risk you can alleviate by having your staff trained up in a VR scenario, rather than on-site, is huge. There’s nothing that conveys the experience in such a way that VR does,” he said.

Vive is also keen to partner up with software developers who actually create VR experiences and programs tailored for particular customers.

“For the best ones, the ones we think have what it takes to deliver end-to-end experiences, they could be turnkey solution providers and have the ability to be Vive authorised resellers working on the full package of software as well as upgrades and maintenance services, installation, technical support and so on. These partners would be a single point of contact for a client,” Dexmier said.

As for its future roadmap, Dexmier said new devices were coming, and that the company hoped to take advantage of 5G to help bring VR and AR to more end-users.

“Once 5G becomes mainstream for data connectivity and its coverage is widespread, we will be able to take all the hardware used to power high-end PC VR systems and shift all the graphics rendering to the cloud,” Dexmier said.

“For us that means there would be no need to have graphics rendering on the device itself. The connectivity will be able to deliver the rendered image at the speed it is rendered natively on a high-end PC.

“That will remove many barriers to entry, the cost of hardware, and the size of headsets - and in fact that’s one of the reasons we still call them headsets, their size. In the future, we’ll be able to call them glasses. I can’t wait for 5G and VR to come together, we’ve already done a whole bunch of testing to look at ways of rendering all the graphics off of the devices and it's really mind-blowing.

“We’ll certainly have new devices coming in the next 12 months, we did want to showcase something in Barcelona for Mobile World Congress, which as you know was cancelled, that was one of the very first mixed reality viewers. That’s something we’re still looking at.”