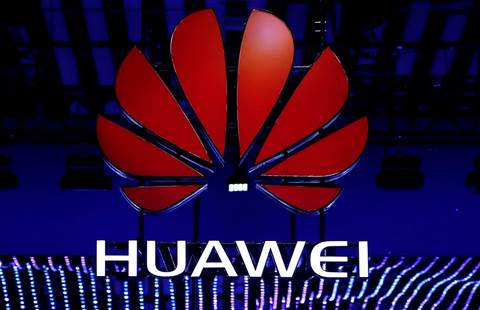 China's Huawei Technologies, the world's largest telecom-equipment maker, unveiled an AI chip on Wednesday that will power its servers, in a push to boost its nascent cloud-computing business.

The move, which will see Huawei use its own chips in its servers for the first time, comes as China is looking to speed up the development of its semiconductor market amid a fierce trade stand-off with the United States that has underscored the country's reliance on imported technology.

China wants locally made chips inside 40 percent of all smartphones in the domestic market by 2025 and is betting billions of dollars on homegrown champions to get there.

Huawei set up its cloud business unit last year and is now trying to gain a firmer foothold in the domestic public cloud market, currently dominated by Alibaba. While the unit accounts for a small part of Huawei's overall sales, it has flagged the business as a potential growth driver.

The new 7 nanometre Ascend 910 chipset that Huawei unveiled at its annual global partners' conference will service this unit and is meant for data centres that crunch mountains of data.

The chip will process data much faster than rival products, Huawei's rotating chairman, Eric Xu, said, adding it was twice as powerful as its nearest competitor Nvidia's v100.

Huawei also unveiled another chip that can be used to power surveillance cameras. It expects the Ascend 310 to help make AI cheaper for hardware firms by allowing them to buy readymade modules to fit their own products.

The Ascend 910 will be available from the second quarter of 2019 and the 310 is already on shelves.

Huawei said it will not sell these chipsets separately to customers, but its efforts would still pit it against big US vendors such as Qualcomm, AMD and Nvidia.

Huawei, however, does not expect any "direct competition" with other vendors as it will not sell to third parties, Xu said at the Huawei Connect conference.

Huawei already makes its own processor for its high-end phones but has so far mainly used Intel and Nvidia chips in its servers. The company is the world's second-largest smartphone maker by volume.

The company will use a mix of its chips and those from other vendors in its servers to cater to various price points, said Qiu Heng, marketing president for Huawei's enterprise business.

It was not clear how much of Intel or Nvidia components would be replaced.

Huawei's push to grow its domestic business comes in the backdrop of growing fears that Western consumers could become reluctant to buy Chinese tech goods due to concerns about security risks and allegations of spying by Beijing.

Bloomberg reported last week that some 30 US companies' systems had been infiltrated by malicious chips inserted by Chinese intelligence agents.

Huawei has long been barred from selling telecom gear in the United States. In August, it was also banned by Australia from supplying equipment for the country's planned 5G mobile network.