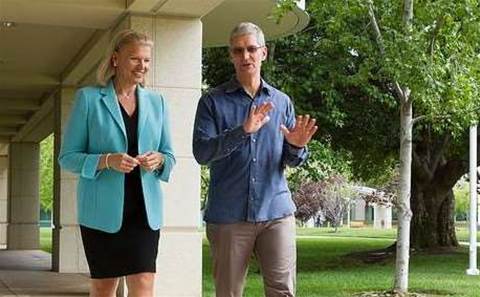 The blockbuster partnership between Apple and IBM to drive iPads, iPhones and Big Blue iOS apps deep into the heart of enterprise took flight Wednesday US time with the release of a bevy of official MobileFirst for iOS apps.

Through the partnership, Apple gains a much stronger path into the lucrative enterprise space. For IBM, it allows it to tightly integrate its cloud capabilities, device management, security and analytics into iOS devices optimised for IBM services. For channel partners of both, it's still unclear to what extent they will be able to benefit from this partnership.

"What's the channel opportunity here? I don't know," said one IBM business partner that asked not to be identified. "IBM has a tendency of creating frustration in the partner community when it rolls out big products or initiatives that aren't channel-ready. It's going to take time before partners connect the dots on how they stand to win here."

Under the terms of the Apple-IBM agreement, IBM will directly sell its version of AppleCare for Enterprise (with on-site service delivered by IBM) and a new mobile device management service called MobileFirst Supply and Management in tandem with the IBM MobileFirst Platform for iOS.

Even though IBM's direct sales will exclusively sell nearly 100 promised IBM-built apps, IBM said it's counting on partners to develop their own apps based on its new MobileFirst Platform for iOS.

Another app aimed at law enforcement allows officers to use their iPhones to gain realtime access to maps and video feeds of incident locations; information about victim status, escalation risk and crime history; and improved ability to call for backup and supporting services.

An app geared toward the financial sector allows advisers to access and manage client portfolios, gain insight from powerful predictive analytics – in the client's kitchen or at the local coffee shop, rather than the adviser's office – with full ability to test recommendations with sophisticated modeling tools all the way to complete, secure transactions, IBM said.

In July, CRN US spoke with Phillip Buckellew, vice president enterprise mobile of IBM Software Group, who said the IBM-Apple partnership is a huge, new growth opportunity for IBM and partners.

"The channel can take advantage of the MobileFirst Platform for iOS to build and deploy solutions that tie iOS devices with IBM's back end," Buckellew said.

The apps, IBM and Apple said, are built exclusively for the iPhone and iPad and can be customised for customers. IBM MobileFirst for iOS apps are delivered in a secure environment, embedded with analytics and linked to core enterprise processes, IBM said. Deployment and management of MobileFirst for iOS apps will be via cloud services developed by IBM specifically for iOS devices, according to IBM.

IBM said that the reseller opportunity will be most likely limited to large enterprise customers that have the resources to create sophisticated mobile ecosystems marrying IBM's data centre technology with the Apple ecosystem. But, IBM said, the real boon may be for independent software vendors (ISVs), startups and app developers in academia.

For some partners, however, the application development opportunity represents too small a piece of the pie.

Eliminating departmental friction within MSPs
By Tom Spring
Dec 11 2014
7:27AM