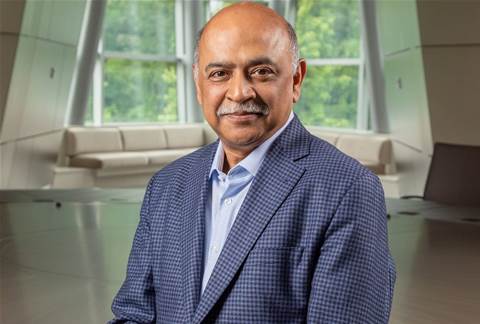 “We’re seeing an increased opportunity for large, transformational projects,” Krishna said, though he noted those multi-year contracts, often worth hundreds of millions of dollars, typically take more time to shape and close.

The number of such deals in the pipeline, driven by customers looking to adopt hybrid cloud and artificial intelligence, suggests strong growth ahead. But, for the time being, IBM is also feeling the impact of austerity measures that its customers, particularly smaller enterprises, implement to save cash.

IBM’s total revenue of US$18.1 billion in the second quarter was down 5.4 percent year-over-year. But its cloud business took in US$6.3 billion for impressive 30 percent growth, partly because it was the last quarter in which Red Hat contributed inorganically in year-over-year calculations.

Red Hat, which just celebrated its first anniversary under IBM, performed strong in the quarter ended June 30 with 17 percent growth, and Krishna said the synergies between the two companies fueled both businesses.

Hybrid cloud, digital transformation technologies and solutions that help tackle workplace restrictions and returns were all strong performers, but anything requiring CapEx or long-term payouts skewed negative amid the pandemic, he said.

IBM has a strong pipeline, Kavanaugh said, “but yield will be linked to rate and pace of the recovery from the pandemic.”

Some business has stabilized in Europe as those countries have gotten a handle on their outbreaks. At the same time, when the virus “started bouncing in June” in the U.S., “we took a step back.”

“The demand profile is really correlating around curves of the pandemic,” Kavanaugh said.

Hybrid cloud generated more than US$23 billion in revenue for IBM over the last 12 months as customers increasingly sought interoperable IT environments, consisting of on-premises infrastructure and private and public clouds—in most cases from multiple vendors, Krishna said.

IBM’s architectural foundation for those heterogenous environments starts with Linux, with Red Hat delivering a tremendous advantage on that front, and then incorporates containers and Kubernetes.

“Red Hat OpenShift is our core product that captures all this and more,” Krishna said.

IBM then delivers its middleware portfolio embedded on OpenShift through its Cloud Paks so they can be deployed on any infrastructure, not just clouds but mainframes and Power Systems servers.

“OpenShift makes it possible to develop and consume software in a new way,” Krishna said, adding the technology enables DevSecOps, boosting security and speed of deployment.

Fueling that platform is the large ecosystem IBM is building through a coalition of best-in-breed ISVs. And IBM has done something similar with major systems integrators, Krishna said, citing Ernst & Young, WiPro and Tata as large consultancies expanding their reach on IBM’s platform.

Krishna noted that IBM sees hybrid cloud as a US$1.2 trillion market. And he believes services—especially migrating workloads and modernizing apps—will constitute half that spend.

In view of that enormous market opportunity, IBM is simplifying and consolidating its operational models, and its culture, to allow decisions to be made faster, while streamlining the structure of its sales organization to be more flexible and responsive to customer needs, Krishna said.

It’s a “unique and challenging time for our clients,” Krishna said. To continue to be a trusted partner, IBM is “spending time and energy to drastically simplify how our teams go to market.”

Despite the overall decline in revenue, earnings-per-share of US$2.18 beat the US$2.07 predicted by Wall Street, and revenue also exceeded analyst expectations of US$17.72 billion.

Those positive figures, coupled with improved margins, sent IBM stock up from the US$126.37 at market close to US$132 at the time of this report.

Eliminating departmental friction within MSPs
By Joseph Tsidulko
Jul 21 2020
10:54AM