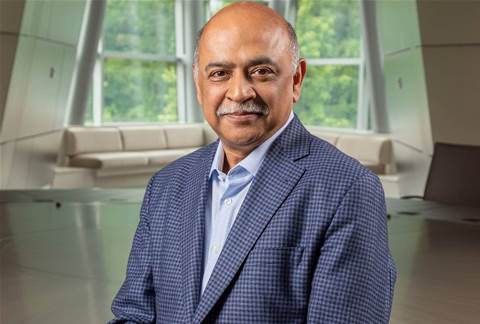 The pause is temporary, Krishna told listeners in an earnings call, and the company still sees reasons to celebrate its performance for the quarter ended 30 September, including strong sales related to cloud products, its Red Hat subsidiary and its newly renamed IBM Consulting segment, formerly called Global Business Services.

“There’s a slight pause, and it will be the end of the third quarter, maybe the beginning of the fourth quarter,” Krishna said. “And we see that pause mostly in hardware and in Kyndryl itself.”

He continued: “I am completely confident that this will be well behind us by the beginning of ’22 -- meaning January.”

IBM shares dropped more than 6 percent after hours Wednesday, trading at US$135.70 a share.

The timing of IBM’s hardware product cycle also contributed to third quarter sales that were flat year over year and totalled about US$17.6 billion. Excluding Kyndryl, the company IBM expects to spin off 3 November, the company saw revenue grow 2.5 percent year over year.

“Software and consulting are our two main drivers of growth. And this was certainly true this quarter,” Krishna said.

One of the bright spots of IBM’s third quarter was Red Hat, which grew 17 percent year over year, according to the company. IBM Consulting had more than 180 new Red Hat engagements during the quarter and OpenShift recurring revenue grew more than 40 percent.

IBM chief financial officer Jim Kavanaugh said that Red Hat-related signings have totalled close to US$3.5 billion since the acquisition in July 2019, which cost IBM US$34 billion.

The day before the end of IBM’s third quarter, Red Hat launched early access of Ansible Automation Platform 2 for existing and prospective customers, with Platform 2.1 expected to become generally available in November.

“There is solid demand here,” Kavanaugh said. “We’re leveraging our skills and ecosystem partners to transform our clients‘ business processes and modernize applications based on OpenShift.”

The consulting business should result in more sales looking ahead, he said.

“We feel pretty comfortable,” Kavanaugh said. “We see a very good book of business, and we continue to see in the fourth quarter IBM Consulting delivering double digit revenue growth and margin dollar and profit dollar and cash dollar contribution while pulling our software and hybrid cloud platform.”

“This is a good indication of the progress in our hypercloud and AI client adoption,” he said.

Part of IBM’s strategy to drive its growth rate is more hiring and related to its acquisitions, executives told listeners on the call.

“With the market opportunity we see, we are making conscious decisions to invest ahead of revenue,” Kavanaugh said. “We are investing in strategic partnerships, new offerings and practices and integrating and scaling out our acquisitions.”

“With a competitive labor market, this is putting some pressure on our labor costs, including higher acquisition and retention costs, which is not yet reflected in our current pricing,” Kavanaugh said. “We expect to capture this value in future engagements, but it will take time to appear in our margin profile.”

“That I believe will result in much better performance, because the only way that they will get anywhere near their target incentive is to make this up in numbers,” Krishna said. “That is probably for the first time that that‘s been true in a long, long time at IBM.”

Earlier this month, Krishna told attendees at the 2021 Best of Breed (BoB) Conference in Atlanta, hosted by CRN USA parent The Channel Company, that IBM’s effort to generate growth in hybrid cloud and security is so ambitious that it’s “got to be” through the channel, since the IT giant has mostly shifted from taking deals direct as part of its “dead serious” push to work more with partners.

Sales in IBM’s systems segment, which includes systems hardware and operating systems software, were US$1.1 billion, down about 12 percent. IBM Z sales were down 33 percent. Power systems were down 24 percent. Cloud sales in this segment were down 42 percent. Storage Systems, on the other hand, grew 11 percent.

The executives attributed weak hardware sales to the product cycle. “Where we miss is based on being on the back end of a very successful mainframe cycle,” Kavanaugh said. “The infrastructure segment took 2.5 points of growth away from IBM ex-Kyndryl.”

In September, late into the third quarter, IBM launched its Power E1080 server, the first in a line of servers built around its 7nm IBM Power10 processor and designed for hybrid cloud environments.

The executives also put the blame on client spending pausing before the 3 November separation of Kyndryl.

“There have been a lot of hardware that actually does flow through Kyndryl, and many of our clients think of that as being an alternate way that they have procured infrastructure in the past,” Krishna said. “So it‘s not a surprise, given the size of the relationship with all those clients, that you see a pause in some of them.”

He continued: “As we also get into a new product cycle with some of the hardware in the first half of ’22, I think that will put it completely behind us. And so my view is that we hold firm to our ’22 and forward projections. And this has actually got no long term or systemic issues that I see.”