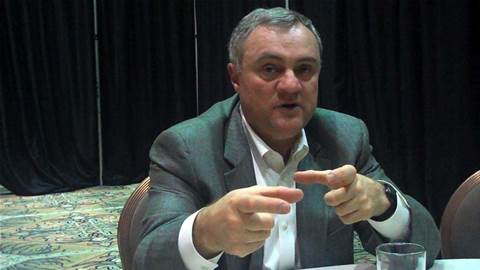 Mills said that his group is keen to add to the long list of recent acquisitions in the analytics space, including BI software vendor Cognos in November 2007, process optimisation software vendor ILOG in July 2008 and predictive analysis company SPSS in July 2009.

"I think you'll see the pattern of acquisitions would be reflective of the things we've already done," he said. "You'll see us do more in the areas of data capture,  instrumentation, analysis... you'll likely see us do more of that as time goes on."

While it provides nowhere near the volume of sales of IBM's core database and middleware products, analytics is a high-growth area with strong services margins for the company. While the market for relational database software is growing 6 percent and the market for CRM and ERP tools at just 3 percent, Mills said analytics is growing at 8 percent.

IBM has spent some US$12 billion building its information management software business, of which US$8 billion was spent on acquisitions. In 2008 alone, IBM spent US$6.3 billion to acquire 15 companies - ten of which joined the Software Group.

That group delivered IBM profit margins of around 85 percent in the 2008 fiscal year. The company closed its last fiscal year with some US$12.9 billion in cash reserves.

Mills said predictive analysis - in which organisations are able to mine their data to inform future business decisions - can bring about benefits as varied as being aligned to future customer buying patterns, improving maintenance cycles or preventing service outages.

The cost of computing, he said, is now at the right level for all kinds of organisations to afford the "manipulation of large amounts of data" to make better decisions.

"IBM has put together a very comprehensive portfolio of products to manage and organise information and tools that can analyse it," he said.

"Our products can collate the data you've already got and make better use of it. What we are finding is that these products are paying for themselves in terms of preventing maintenance."

Mills and his executive peers admit that of the 15,000 new clients that have signed on with IBM since it built out its information management software group, only around 1000 of them are "on the journey" to "use information as a business asset".

IBM is nonetheless building out analytics skills within its global services arm to win over the rest of the market - with some 35,000 staff globally deployed to take advantage of the opportunity.

While the IBM Software Group only earned 21.5 percent of IBM's total revenues in fiscal 2008, it was responsible for over 40 percent of the company's profit and was the driver behind much of IBM's services opportunities - which earned IBM some 57 percent of its revenues and 41.6 percent of its profit.

He said the products do not compete with key software partners such as SAP.

"SAP CRM or (Oracle-owned) Siebel is sold specifically as a sales force automation tool for contact centre staff," he said. "While often there may be report writing capabilities off the back of the CRM system, these aren't looking for patterns and complex relationships [as analytics software is]."

Mills said he has a preference for channel partners that bring "industry specific knowledge and understanding" to a given deal.

"They typically have practices based in industry expertise, with a depth of understanding as to how to solve specific customer problems," he said. "We recruit partners with deep, deep, deep skills and partners that are self-contained to some degree. We like for them to solve customer problems with very minimal help from us."