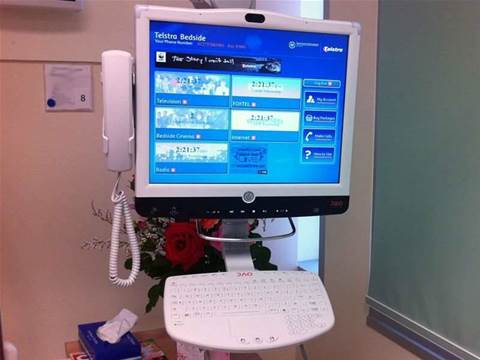 They will be supplied by Telstra and deployed by integrator IBM under an eight-year, $36.7 million deal announced by state Health Minister John Hill today.

The 17-inch devices will reach eight metropolitan hospitals and four country hospitals in South Australia by next October, beginning with Noarlunga Hospital in southern Adelaide next week.

When clinicians withdraw their smartcards, the terminals revert to functioning as an entertainment unit, offering patients packages that range in price from $6 to $18 a day.

Hill said South Australia was the first Australian state “to put electronic clinical applications at patients’ bedsides on this scale”.

Telstra’s executive director of government Chris Pearce said video content for the devices would be curated by a working group of SA Health and Telstra staff on an ongoing basis.

An estimated 12,000 patients per year were involved in the pilot, which Pearce said had “gone particularly well”.

By allowing clinicians to electronically order tests and medication, South Australia’s chief medical officer Paddy Phillips said the terminals could improve safety and reduce “the risk of errors with the traditional handwritten approach”.