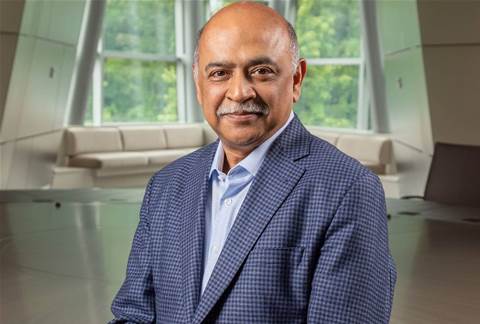 A strengthening IT environment that is playing into IBM AI and hybrid cloud capabilities means a rosy future for IBM and its B2B business, CEO Arvind Krishna told investors Monday.

“It serves as both a deflationary force and a force multiplier, and is especially critical as clients face challenges on multiple fronts from supply chain bottlenecks to demographic shifts,” he said. “Given its ability to boost innovation, productivity, resilience, and help organizations scale, IT has become a high priority in a company’s budget. As such, there is every reason to believe technology spending in the B2B space will continue to surpass GDP growth.”

That plays well with IBM’s hybrid cloud and AI strategy where the company is investing in its offerings, technical talent, ecosystem, and go-to-market model, Krishna said.

“Demand for our solutions remains strong,” he said. “We continued to have double-digit performance in IBM Consulting, broad-based strength in software, and with the z16 [mainframe] platform launch, our infrastructure business had a good quarter. By integrating technology and expertise from IBM and our partners, our clients will continue to see our hybrid cloud and AI solutions as a crucial source of business opportunity and growth.”

Krishna said hybrid clouds are about offering clients a platform to straddle multiple public clouds, private clouds, on-premises infrastructures, and the edge, which is where Red Hat, which IBM acquired in 2019, comes into play, Krishna said.

“Our software has been optimized to run on that platform, and includes advanced data and AI, automation, and the security capabilities our clients need,” he said. “Our global team of consultants offers deep business expertise and co-creates with clients to accelerate their digital transformation journeys. Our infrastructure allows clients to take full advantage of an extended hybrid cloud environment.”

As a result, IBM now has over 4,000 hybrid cloud platform clients, with over 250 new clients added during the second fiscal quarter, Krishna said.

“Those who adopt our platform tend to consume more of our solutions across software, consulting, and infrastructure, [and] expanding our footprint within those clients,” he said.

IBM is also benefitting from the steady adoption by businesses of artificial intelligence technologies as those businesses try to process the enormous amount of data generated from hybrid cloud environments all the way to the edge, Krishna said. An IBM study released during the second fiscal quarter found that 35 percent of companies are now using some form of AI with automation in their business to address demographic shifts and move their employees to higher value work, he said.

“This is one of the many reasons we are investing heavily in both AI and automation,” he said. “These investments are paying off.”

“One of the implications of quantum computing will be the need to change how information is encrypted,” he said. “We are proud that technology developed by IBM and our collaborators has been selected by NIST (National Institute of Standards and Technology) as the basis of the next generation of quantum-safe encryption protocols.”

IBM during the quarter also move forward in its mainframe technology with the release of its new z16 mainframe, Krishna said.

“The z16 is designed for cloud-native development, cybersecurity resilience, [and] quantum-safe encryption, and includes an on-chip AI accelerator, which allows clients to reduce fraud within real-time transactions,” he said.

IBM also made two acquisitions during the quarter related to cybersecurity, Krishna said. The first was Randori, an attack surface management and offensive cybersecurity provider. That acquisition built on IBM’s November acquisition of ReaQta, an endpoint security firm, he said.

While analysts during the question and answer part of Monday’s financial analyst conference call did not ask about the news that IBM has brought in Matt Hicks as the new CEO of Red Hat, they did seem concerned about how the 17-percent growth in Red Had revenue over last year missed expectations.

“That said, we had said late last year that we expect growth in Red Hat to be in the upper teens,” he said. “That expectation is what we are going to continue with. … Deferred revenue accounts for the bulk of what has been the difference in the growth rates coming down from last year to this year.”

“So we feel pretty good about our Red Hat portfolio overall. … Remember, we‘re three years into this acquisition right now,” he said. “And we couldn’t be more pleased as we move forward.”

When asked about the potential impact from an economic downturn, Krishna said IBM’s pipelines remain healthy and consistent with what the company saw in the first half of fiscal 2022, making him more optimistic than many of his peers.

“In an inflationary environment, when clients take our technology, deploy it, leverage our consulting, it acts as a counterbalance to all of the inflation and all of the labor demographics that people are facing all over the globe,” he said.

Krishna also said IBM’s consulting business is less likely than most vendors’ business to be impacted by the economic cycle as it involves a lot of work around deploying the kinds of applications critical to clients’ need to optimize their costs. Furthermore, he said. Because consulting is very labour-intensive, it is easy to hire or let go tens of thousands of employees as needed, he said.

On the consulting side, technology consulting revenue was up 23 percent over last year, applications operations up 17 percent, and business transformation up 16 percent.

IBM also reported revenue of $8.1 billion from sales to the Americas, up 15 percent over last year; sales to Europe, Middle East, and Africa of $4.5 billion, up 17 percent; and $2.9 billion to the Asia Pacific area, up 16 percent.

Sales to Kyndryl, which late last year was spun out of IBM, accounted for about 5 percent of revenue, including 3 percent of IBM’s Americas revenue.