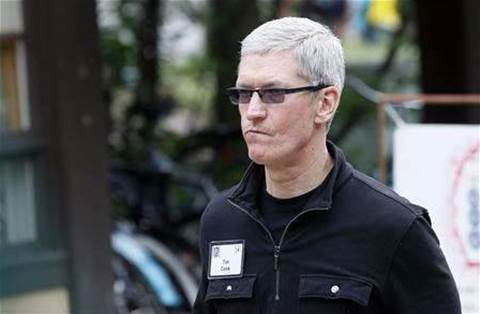 Carl Icahn has spoken again with Apple Inc's Tim Cook and plans a longer discussion with the chief executive over dinner next month about the size of the iPhone maker's buyback program, the activist investor tweeted on Thursday.

The hedge fund billionaire, known for launching aggressive assaults on American boardrooms, caused a sensation last week when he revealed on Twitter he had taken a large position in Apple and was pushing for thecompany

to expand its program of share buybacks -- already one of the market's largest.

That revelation, including comments about how he thought the stock was undervalued, pushed shares of the $400 billion corporation up 5 percent on Aug 13.

But on Thursday, Apple's stock held steady at about $501.11 in late trade on the Nasdaq, resuming trade after a glitch halted trading in Nasdaq-listed securities for more than two hours.

Icahn's tweet on Thursday, which came during the trading suspension, did not reveal much else apart from the fact that he and Cook had madeplans

for an in-person meeting next month.

"Spoke to Tim. Planning dinner in September. Tim believes in buyback and is doing one. What will be discussed is magnitude," the billionaire said on Twitter on Thursday, without elaborating.

Apple did not respond to requests for comment. In April, the company bowed to Wall Street pressure and said it would return $100 billion to shareholders by the end of 2015 - double the amount set aside previously. It got there in part by raising its dividend 15 percent and boosting its share buyback program six-fold to $60 billion, one of the largest of its kind

As part of that program, it bought about more than $16 billion worth of stock in the June quarter, much more than analysts had expected.

Icahn told Reuters last week that the iPhone, iPad and Mac computer maker has the ability to do a $150 billion buyback now by borrowing funds at 3 percent. And he argued that by increasing its program, Apple's stock could regain the $700 level it touched in September.

Icahn, who this year launched strong opposition to Michael Dell's $25 billion effort to take Dell Inc private, did not say how many shares of Apple he holds.

A source familiar with the matter, who declined to be named because Icahn hasn't disclosed his holdings in Apple, said the investor's stake was worth around $1 billion, a fraction of the company's market value of more than $400 billion.

He is the second prominent activist to target Apple this year. The company averted a dispute with hedge fund manager David Einhorn of Greenlight Capital, who sued Apple to try to block a proposal regarding voting on preferred shares. Einhorn later withdrew his lawsuit.

Analysts said Icahn's interest in Apple helped cement improving sentiment on the stock, as investors began to anticipate a new line-up of gadgets in the fall, including possibly a cheaper iPhone that can spearheard a deeper drive into fast-growing emerging markets.

Speculation has also persisted that the company may be planning some sort of TV or smartwatch product - worn on the user's wrist - in the near future.

Cook said last month there will be products "in new categories" but gave no details.