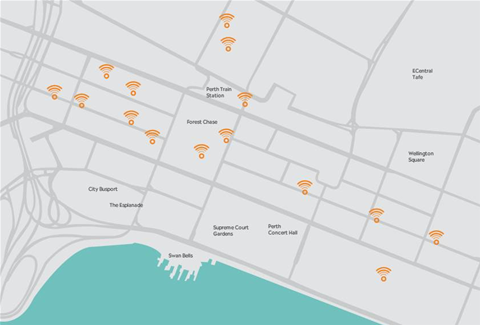 iiNet has rolled out wireless hotspots across Perth's central business district in a bid to extend its reach beyond existing customers' fixed lines.

The telco has established 15 hotspots across the CBD, allowing subscribers of iiNet, Westnet, Ozemail and Netspace to use any email address and password associated with their internet subscription accounts to access the free wireless network.

The company expects to make the service available to customers of TransACT, Internode and AAPT's consumer division in the future.

Balmik Soin, operations manager in iiNet's business division, said the Perth network is "just the start of our wi-fi rollout plans" and had come as the result of an opportunity with Western Australia-based telco services provider Acure.

"For us, it's more a toe in the water. We're putting it out there for our customers to trial and test and see if we can develop it from there," he said.

Users are given access to a 512 Kbps connection on one of the hotspots, with each node able to support an average 200 users simultaneously.

Each node is connected to 100 Mbps or gigabit backhaul but Soin said the provider was keen to test how subscribers used the network.

"It isn't designed for customers to leach and download massive amounts, it's really designed for email and basic web browsing," he said.

"We're taking more of a fair use approach at the moment... we just want to make sure there's not a couple of users who get on there and ruin it for everyone else."

The network comes in addition to an existing agreement with wireless provider Tomizone, which offers subscribers 100 MB of free wireless access a month over Tomizone-branded hotspots.

Soin said the telco could look to East Coast deployments but would likely focus on adding more hotspots to Perth and surrounding areas first.

Australian telcos and mobile carriers have cooled on the notion of ubiquitous, free wireless access for subscribers with decade-old plans for metropolitan access by the likes of Telstra and Optus having been sidelined or completely scrapped.

With iiNet set to finish its acquisition of Internode by the end of February, Soin said the companies were in discussions around integrating the Perth network and Internode's own hotspots in Adelaide.