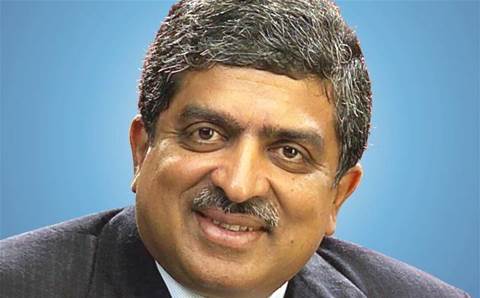 One of Infosys's founding figures has returned to the board following a public spat between the company's co-founder, board and former CEO over governance issues.

The ascension of Nandan Nilekani to chairman of the board on Thursday prompted the resignations of current board chairman R Seshasayee, beleaguered former CEO Vishal Sikka, and two other board members. The move adhered to the wish of 12 institutional investors owning a 10 percent stake in Infosys, who called for Nilekani's return.

"Given his credentials, we feel, that his joining the board at this stage, will restore confidence of stakeholders in the company and also facilitate resolution of the contentious issues that Infosys is facing presently," the investors wrote in a letter.

Nilekani co-founded Infosys alongside Narayana Murthy, served as CEO of the Bengaluru, India-based systems integrator from 2002 to 2007, and owns a 2.3 percent stake in the company. Murthy raised concerns over governance issues at Infosys, and claimed in recent emails that Infosys' independent directors felt that Sikka was more CTO material than CEO material, according to media reports.

Infosys's stock climbed US$0.17 (1.15 percent) to US$14.99 in trading on Thursday, but is still trading US$0.94 (5.9 percent) lower than it was a week ago prior to Sikka's shocking resignation. Sikka was replaced on an interim basis by chief operating officer Pravin Rao, who will continue in that role until a permanent CEO can be found, which is expected to happen no later than March 2018.

"I cannot carry out my job as CEO and continue to create value, while also constantly defending against unrelenting, baseless/malicious and increasingly personal attacks," Sikka wrote in a letter to Infosys employees, which he shared in a blog on 17 August.

A group of Infosys founder led by Murthy wants the eventual removal of all but three directors of the 11-member board, according to a Bloomberg report on Thursday. But the moves will take time since members are required to oversee audit and risk committees, among other responsibilities, according to the report.

Bloomberg said it's unclear whether the investor group clamoring for Nilekani's return to the board supports Murthy's broader aims. Infosys, for its part, said all four of the departing board members welcomed Nilekani's appointment.

"Last week, I said that my remaining on the Infosys board was to primarily enable a smooth transition," said Sikka, who had been set to serve as Infosys's executive vice chairman until a permanent CEO took office. "In Nandan, we have found an ideal leader to manage this transition."

Seshasayee has served on Infosys's board since 2011. Prior to that, he spent more than a dozen years as managing director of Indian commercial vehicle manufacturer Ashok Leyland.

"Under Nandan, Infosys will build a cohesive management team that will no doubt take the company to a leadership position in the industry," Seshasayee said in a statement. "I believe these changes will infuse further confidence to the stakeholders in executing the transition plan and in reinforcing the strategy for the future."

During his five years leading Infosys, Nilekani quadrupled Infosys's revenue to US$2 billion and led the implementation of India's ambitious biometric identity program. More than one billion Indians are now enrolled in the program architected by Nilekani, according to Infosys.

"I am happy to return to Infosys, now in the role of non-executive chairman, and look forward to working with my colleagues on the Board and in executive management on the business opportunities we see before us and delivering benefits to our clients, shareholders, employees and communities," Nilekani said in a statement.

Infosys under Sikka set a goal of hitting US$20 billion in revenue by 2020, but the US$10.2 billion solution provider would be hard-pressed to reach that target given that the company provided revenue growth guidance of just 6.1 percent to 8.1 percent for the current fiscal year.

Some of Infosys' recent investments haven't panned out as expected, with the company's retail and consumer products businesses providing just 15 percent of total revenue, despite the acquisition of e-commerce platform Skava two years ago, Boz Hristov, a senior analyst covering professional services for Technology Business Research (TBR), wrote in April.

Historically, Infosys has invested more heavily in startups, but Hristov said those bets have yet to move the needle much. Hristov said that Infosys would need to buy a large consultancy that's really strong in specific verticals or geographies to regain the market position it enjoyed five or ten years ago.