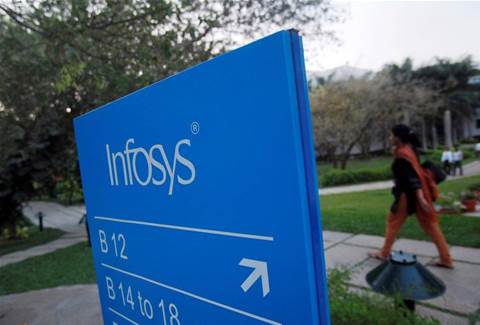 India's Infosys Ltd on Wednesday raised its annual revenue growth forecast, betting on a surge in client demand for digital services such as cloud computing and buoyed by large deal wins worth more than US$7 billion in the quarter to December.

The country's IT and software services sector generated exports of more than US$147 billion in revenues in the year to March 2020, according to sector lobby group NASSCOM.

Infosys, India's second biggest integrator by market value, secured a cloud partnership with German automaker Daimler AG and a strategic partnership with British aero-engine maker Rolls-Royce among other deals in its third quarter.

It said it expects annual revenue in the financial year to end-March 2021 to grow between 4.5 percent and 5 percent in constant currency terms versus the previous year, higher than the 2 percent to 3 percent forecast earlier.

"There is a huge move to accelerate digital spend, to do more things on the cloud and ...we are now ready to participate and play in(to) this strength massively," Infosys CEO Salil Parekh told an online news conference.

The December quarter is typically a weak one for India's IT sector as Western clients work fewer days due to the holiday season, but earnings in the period strengthened this year as businesses increased investment in digital services to support home working during the pandemic.

Larger rival TCS, which counts Microsoft Corp and Malaysia Airlines among its customers, last week reported a rise third-quarter profit and forecast strong growth for the year ahead. Wipro, which provides content moderation for Facebook, also reported on Wednesday an increase in consolidated net profit and said the demand environment was steadily improving.

Infosys' revenue from operations rose 12.3 percent to 259.27 billion rupees with executives saying they were seeing broad-based growth across many industries in cloud services and data analytics.

"We feel a lot more optimistic about banking and financial services on the back of lot of large deal wins," chief operating officer Pravin Rao said, without giving further details.

The company will hire around 24,000 staff from college campuses in India next year, Rao said, adding to the near 720,000 people already employed by Infosys and TCS.