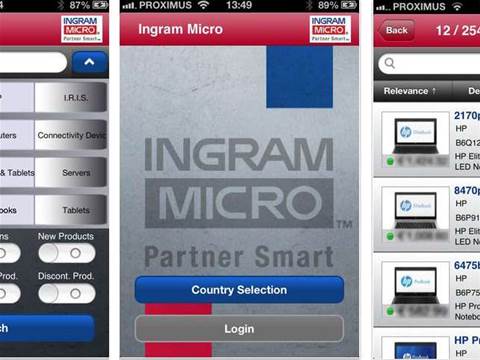 Total gross profits were up to $585 million for the quarter, compared to $467 million from the corresponding period. Net income however actually fell by nearly 40 per cent in large measure due the a $28.5 million net tax benefit it received last year’s comparable quarter.The company’s Australian operation had been a drag on the overall result for several years due to huge problems with its supply chain systems, however the Ingram Micro is now seeing the benefits of having addressed those issues.

Speaking to analysts at a post-announcement conference call (Transcript available on SeekingAlpha.com), Ingram Micro President and  CEO Alain Monie said Australia would return to profitability within the year.  "Our progress in Australia in the first quarter was quite encouraging. Customers are clearly coming back to us and our better-than-market, year-over-year growth of 11 per cent solidifies our expectation of reaching a profitable run rate by year-end.

"As we look at the second quarter, we currently expect a one per cent  to four  per cent sequential increase in revenue with consolidated gross margin flat to slightly up. Our expectations are based on operating leverage, stronger contribution from higher-margin areas, growth in emerging markets and continued recovery in Australia."

In response to a qyestion during the call, Humes said, "In Q1, we lost about $5 million, operating loss. So that is an over-$5 million improvement sequentially, and close to that on a year-over-year basis.

"We expect a incremental improvement in Q2, also Q2 being generally the seasonally strongest quarter for Australia."

"This year, we're actually starting off feeling much better about the progress we're making on Australia and are committed to continue to drive success there."

Monie elaborated on the Australian situation when asked to explain Ingram's approach to winning back marketshare down under.

"The main reason customers left us when we had our problems was service levels where our systems didn't allow us to really serve the customers' needs, as they were expecting us. And so as a result, they had to find alternatives to continue running their business, which is very understandable."He said

"Now that didn't mean that they didn't appreciate their prior relationship with Ingram. And as we fix our problems, there is a natural comeback from customers who've been with us loyally for a very long time."

He stressed however that didn't imply Ingram was buying back market share through pricing. "In fact, we don't want to do that because that would not be a sustainable way to reestablish our business there. So it's mostly by reestablishing the service levels that they were used to and which now we are able to provide.

"We expect to regain a good portion of the share loss, but we also are realistic in the fact that we may not regain all of the share loss. As a result of that we have taken pretty clear decisions on reducing our cost basis, which have been implemented. And so I would say that the new normal level for us will probably be at the lower level than where we used to be but at somewhere in between where we are today and where the past history was."

"The end of the year should be in the black [on] run rate. And then as quickly as we can, we will get back to where we really want to be as far as profitability. Will that be a few months? Yes, certainly, within next year."

Worldwide total revenues grew 19 per cent to $10.26 billion, comfortably ahead of analyst predictions of $10.1 billion. Roughly $1.2 billion of the extra $1.8 billion revenue was generated by Brightpoint and Aptek, two businesses it acquired last year.

Profits in the core distribution business actually fell, due to lower margins in the tablet and personal devices space.

"I am pleased with the progress we are making on driving cost synergies and business integration in our recent acquisitions," said Monie. "More importantly, the addition of these companies has expanded our capabilities in highly strategic markets and new geographies and is expected to provide a strong foundation for future profitable growth. I am also encouraged by our progress in Australia and our ability to drive solid overall revenue growth; however, I am not satisfied with our bottom line results.

"High growth in tablets and other mobile devices continues to affect gross margins," Monie continued. "However, this high growth product opportunity also brings the addition of a new set of vendors and customers to the Ingram Micro ecosystem, which enables us to tap into the associated supply chain services to large OEMs and service providers. These services carry better margins and lower working capital metrics. We recognized this opportunity early last year, leading us to acquire BrightPoint, our new mobility business, which has already been nicely accretive to gross margin and earnings."

Create your business scorecard
By Andrew Birmingham
Apr 26 2013
8:52AM