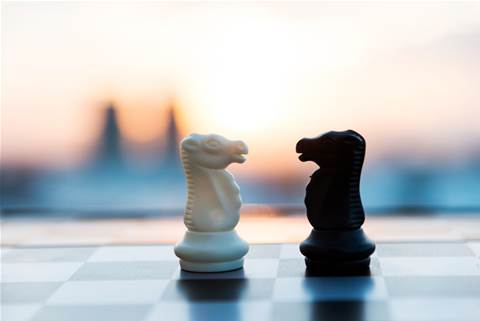 “If someone had told me a few years back that three of the biggest distributors (Tech Data, Synnex and Avnet) were going to combine and we had the chance to compete against them, I’d say game on,” said Robinson. “We have a very healthy respect for all our competitors, but we’re also very confident and proud in our own capabilities, both globally and in the U.S.”

Synnex and Tech Data will create the world’s largest IT distributor through their merger, coming in nearly $10 billion larger than Irvine, Calif.-based Ingram Micro, which had $47.2 billion in sales in 2019. The merger is expected to close in the second half of 2021, and generate $100 million of optimization and synergy benefits in the first year after closing and some $200 million by the end of the second year.

The Synnex-Tech Data deal comes with Ingram Micro in the midst of finalizing its $7.2 billion acquisition by private equity powerhouse Platinum Equity.

“The deal is continuing to look like it will close at the end of Q2. We’re thrilled to become part of the Platinum family,” said Robinson. “They have such a tremendous reputation in the market. We’re very excited with the opportunity to be part of that family.”

What was your first reaction when you heard the Synnex-Tech Data news? Actually, did you know that it was coming before Monday? Or was it a surprise to you?

They did a good job of keeping that quiet.

No doubt. You know, what’s interesting, I think because of COVID and all of us being in our houses, I’m not bumping into my competitors. Many of them, as you would imagine, I’ve worked with for a long time, either at Ingram Micro, or just from a competitive stance. So when you don’t see anybody, you’re not having the dialogue at the different vendor conferences and such, so it’s more quiet than ever right now. But yes, that was kept quiet.

So what was your first thoughts on hearing the deal?

Excitement. You know, in this industry, the opportunity is bigger than ever right now. And I just think it’s exciting from a competitive standpoint, the ability–if someone had told me a few years back that three of the biggest distributors were going to combine and we had the chance to compete against them, I’d say game on. We have a very healthy respect for all our competitors, but we’re also very confident and proud in our own capabilities, both globally and in the U.S.

Three of the biggest distributors combined?

Is this type of merger and consolidation in distribution a healthy thing, or is it something to worry about?

Oh, I think it would be healthy. In the short term, they’ve got a lot of work ahead of them, but without a doubt [will be] a formidable foe to go up against. But I honestly think it will be good for all involved. Everybody has a different perspective, and in my opinion, you look at the resellers and two large distributors just came together. Does that work out good for them? It all depends on who they’re partnering with and what their needs are. I think the same thing could be said for the vendors. They have to look at, are they going from several major distributors to work through and now two of them are combined, and is that good? And the answers in all honesty are probably across the board. There’s pros and cons. I don’t think there’s just one answer, but from a high level, I think it’s healthy. Can you see this type of consolidation continuing? I mean, is there a still plenty of room to consolidate distribution?

Always. Mostly because there are new players coming into the market of different sizes and different technology focuses and competencies. So I would say yes.

A competitor? It depends on the size. We’ve done some in DCPOS (data capture and point of sales), but not recently. Smaller players around the world. ]The most recent was in December of Columbia-based Canal Digital.]

Is that something that Ingram Micro could do more of in the future though?

Something you're looking at now?

I think all of us are always looking.

Do you think distribution as an industry needs consolidation?

I think so. I think that when you look at any industry, there’s almost always consolidation. Anybody that wants to get stronger is going to grow in one of two ways: You’re either gonna do it organically or through acquisition. If you look at most of us, were doing both. The combination of Tech Data and Synnex basically will result in a new number-one distributor in terms of revenue. Does that impact competition in the distribution space or not?

Well, sure. It will impact competition in those two companies coming together and their global footprint. I believe we still have a larger global footprint in regards to the number of countries we do business in. I’ve said it before: While we keep an eye on what the competition is doing, our main focus is to compete against ourselves. If we do that, we’re going to continue to be best in class.

Is Ingram Micro looking at changing any of its programs or processes in response to a new, larger competitor?

No, no new programs or anything like that. It’s like you would expect. Everybody has to look at their geographic location and how that may impact you. If you look at how it will impact vendors, I think most of the overlap is going to come in the U.S. between the two companies. We see that as an advantage for us, especially in the short term as they’re going to be quite busy. Any time any two companies of that size come together, they are going to be spending a lot of time looking at how to integrate, which teams are working what lines, vendors that overlap, et cetera. And we’re also excited. When Tech Data bought Avnet, we posted some of the best numbers the company’s ever seen after that. And we picked up some talent from Avnet that were just a really great fit in the Ingram culture. So we’re also excited about the opportunity. Moving from the acquisition, what is the latest with Ingram Micro’s acquisition by Platinum Equity from its current parent company, HNA? Are there any advantages to Ingram Micro working with Platinum versus HNA, which has had some financial issues and is based in China?

First of all, the deal is continuing to look like it will close at the end of Q2. We’re thrilled to become part of the Platinum family. They have such a tremendous reputation in the market. We’re very excited with the opportunity to be part of that family. [With regard to HNA], being owned by a U.S. company will free us up to go out and grow the business in the public sector market, Fed and SLED (state, local, and education). But you have to remember, we were ring-fenced off. We ran the business like we always did. When we got bought by HNA, the executive team said we are going to continue to run the business the same way. And that same executive team is here today, four years later, looking forward to partnering with one of the premier PE (private equity) firms in the world.

Was that ring-fencing off of the company an easy thing to do?

It went the way we wanted it to, which was, we got approval from CFIUS (Committee on Foreign Investment in the United States), and it worked well for the four years, but we’re a quarter away from coming under a new and exciting parent in the U.S. And we’re very excited about our growth opportunities.

Another big happening is the new administration in the U.S and some of the things that the Biden administration wants to do and the kinds of investments it wants to make. What is Ingram Micro seeing in terms of where that might impact the IT industry and distribution and your business?

You know, we talk a lot about the outside factors and yes, we keep an eye on them, but we’re much more focused internally on sticking to our values, sticking to our strategy, and looking where we can grow the business. So I guess I would answer that we keep an eye on what’s going on, on the political front, but we’re much more focused on our strategy and going out and executing day to day. What does 2021 look like for Ingram Micro? What are some of the key things that you're following that will impact your business this year, besides the merger of your top two rivals?

We’re extremely excited. We just put up the best results in the company’s history in 2020, and we’re working on expanding that. We’re going to continue to invest from the SMB to the enterprise.

And where are the biggest opportunities that would be driving those investments?

I think it’s continuing to take advantage of the work from home trend that continues to go strong. Somebody somewhere called it “everything from home” because that’s where we’re working, it’s where the kids are going to school, it’s where you’re shopping, it’s where you’re working out, doing everything, all the technology that wraps around that. We’re starting to see data center infrastructure, which was a little slower in 2020, starting to pick up. So we’re excited about that. And then you have your things that are always strong, security and areas like that. There are just a lot of bad guys in the world. And with the constant breaches that you hear about, it’s just a constant reminder of how important security is in the IT world.