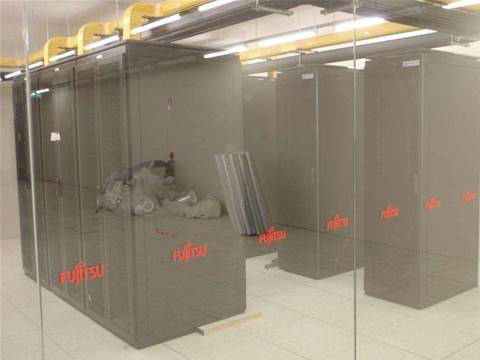 The centre (see photo gallery right), said to be valued in the ‘tens of millions’ of dollars, is already at 60 percent occupation despite the fact it won’t be fully completed until November, according to Michael Gunton, general manager of data centre services at Fujitsu Australia.

Fujitsu has also described it as ‘the most environmentally sustainable facility of its kind in Australia’ – with state-of-the-art technology implemented from the likes of Powerpax, Stulz, Gridlogix and MGE (owned by Schneider Electric/APC).

“We were running out of floor space at our facility at North Ryde,” said Gunton.

The Homebush Bay site started life as a purpose-built data centre for the Department of Social Security in the 1980s. It was later handed over to HP-Compaq in 1995, before they also relinquished the site some ten years later.

“At that stage it was an old, run-down data centre,” said Gunton.

“It had everything you’d find walking into any older-style data centre today.”

This was at odds with Fujitsu’s vision for the new centre. “We had a vision of a more efficient, green, tier-3 data centre with ASIO-level security,” explained Gunton.

However, the Japanese giant saw the potential of the site. It took over the long-term lease, and completely gutted the building in January of this year. It was the start of an 11-month long refurbishment that now nears completion.

“We were lucky it was [already] a purpose-built data centre,” said Gunton.

But changes still needed to be made to upgrade the space from its old tier-2 status to tier-3, and to make the centre as energy efficient as possible.

Eliminating departmental friction within MSPs
By Ry Crozier
Oct 23 2008
8:06AM