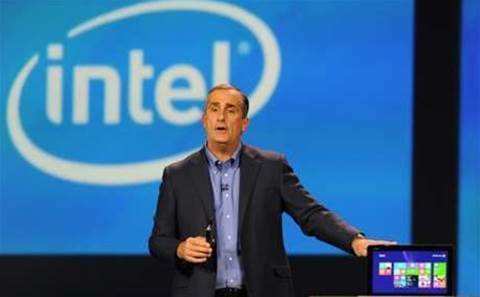 Intel CEO Brian Krzanich kicked off the CES 2018 opening keynote by stressing the chip company's commitment to security in the wake of the Spectre and Meltdown exploits.

"There's no information that these exploits have been used to get customer data, and we're working tirelessly to make sure it stays that way," Krzanich said on Monday during the Intel CES keynote.

The Spectre and Meltdown exploits, which account for three variants of a side-channel analysis security issue in server and PC processors, could potentially enable hackers to access protected data. The exploits were made public last week, sending Intel's shares down and causing its market capitalization to fall by more than US$12 billion between 2 and 4 January.

These security flaws, found in chips from multiple vendors, including Intel, revolve around a process called speculation, which allows processors to skip ahead in their execution of code to save time on computing processes – but also potentially enabling malicious code to access a portion of the memory on the chip.

Krzanich praised the collaboration between Intel's ecosystem partners in addressing the exploits – including software and OS vendors – and said that there had been no evidence that hackers have accessed data yet.

"I want to address the recent security findings reported as Meltdown and Spectre… the collaboration between companies has been remarkable," Krzanich said. "Security is the number one job for Intel, and the primary focus of our decisions revolve around keeping customers safe."

Intel is moving forward with a "comprehensive" threat mitigation plan that includes operating system and firmware updates that will be made available in the next "few weeks."

"The impact is highly workload dependent," said Krzanich. "Some workloads will have more impact than others. We'll continue working with the industry to minimize the impact together."

Krzanich said that Intel would update 90 percent of processors from the past five years within the next week, and the remaining processors will be updated by the end of January.

But meanwhile, he said, customers can make sure their software and systems are updated and patched. Several vendors, including HPE and Lenovo, have already come forward and said that they would have software patches coming soon.

"The best you can do is apply updates from OS vendor and system manufacturers as soon as they come available," Kranich said.

Beyond Intel's security issues, Krzanich also discussed Intel's commitment to data and the various applications that the chip company is investing in – including artificial intelligence and virtual immersive sporting experiences.

"[Data] has no limits, and it's expanding exponentially," he said.