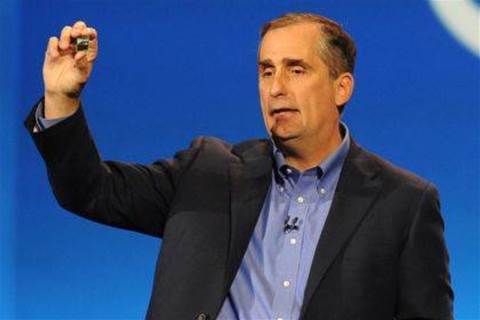 The king is dead, long live the king. Well, not quite, but Brian Krzanich, Intel's chief executive has stepped down from the chipmaker's top job after it was discovered he was having a consensual relationship with another Intel employee, which breached the firm's non-fraternisation rules.

While workplace relationships might be ten-a-penny in other organisations, Intel took a dim view of Krzanich's flaunting of the rules, especially as a figurehead of the company. As such, he'll now be replaced by Robert Swan, who has been serving as Intel's chief financial officer, until a permanent replacement is found.

Krzanich's resignation is certainly a high-profile exit from a major tech company, with it seeing a 2 percentage drop in share price as the CEO step-down came to light.

Arguably, 2018 wasn't the year for Krzanich, who came under fire for offloading his Intel shares after the company had been informed about the Meltdown and Spectre flaws, serious vulnerabilities in its processors dating back over a decade.

But while Krzanich seemed to escape being hauled over the coals for potentially questionable share dealings, his breach of a core corporate rule was a step too far.

So ends Krzanich's tenure in the hot seat at one of the largest technology companies in the world, and the end of his 36-year career with Intel.

During Krzanich's time as Intel's CEO it would be fair to say the chipmaker has seen its ups and downs.

He was at the forefront of Intel's shift from being reliant on making chips for personal computers to becoming a so-called "slave-driven" company, whereby the firm embraced the concepts of big data analytics, the Internet of Things, artificial intelligence, and of course cloud computing.

Intel's continued dominance in the data centre market was one example of how it became less reliant on selling chips for desktop PCs and laptops.

However, Krzanich's rule also saw a failure to properly push into the smartphone market. Intel's Atom processors was trounced by ARM-based chipsets from the likes of Qualcomm and Samsung.

Speaking of the latter, under Krzanich's rule Intel was knocked off the top spot by Samsung as the largest producer of semiconductors, a position many had though unassailable.

At the same time, the ex-CEO also championed a diversity program, funnelling $300 million dollars to promote workplace diversity in 2015.

That announcement was made at CES 2015; a year later, Krzanich's keynote was punctuated by drones and the tiny wearable Curie chip, along with other tech, positioning Intel as a company that's about more than just processors.

Yet come 2018, Intel's New Devices Group, which included the attention-grabbing Vaunt augmented reality glasses, was shuttered. This closure shortly followed on from Intel's move to sell-off its Wind River division, demonstrating that perhaps product diversity wasn't working for the chipmaker.

That being said, 2018 wasn't a great year for Intel's processors either, given it came to light how they were affected by the Meltdown and Spectre bugs at a hardware level.

And before that Intel has been lambasted for struggling to get its Core i family of processors onto the much-vaunted 10-nanometre process; current eighth-generation Core i chips remain stuck at 14nm despite 10nm having been previously touted to arrive with the still missing-in-action Cannon Lake architecture. Instead, it has the Coffee Lake architecture which is mostly an evolved version of Intel's 14nm fabrication process.

So while Intel appeared to struggle to take its processor architecture to the next level, AMD got its act together, likely tired of languishing in the low-end of the CPU world, and came out with its Ryzen family of processors. These were the first AMD chips to properly challenge Intel in years, and while Intel still had AMD pipped in some processor areas, it now had stiff competition in the market.

Again, all this happened under Krzanich's leadership and isn't exactly a litany of success. But then Krzanich also helped see Intel grow its stock value and enjoy record profits in its latest financial reports.

Suffice to say, Krzanich's time at the helm of Intel was a mixed bag, But it's unlikely things will change much for Intel in the short term, given it'll likely be business as usual for the chipmaker as it continues to develop and evolve its CPUs and build out its capabilities for delivering data-centric products and services.

However, Swan will serve as the interim CEO, so unless that becomes a permanent position, Intel will need to find a new figurehead for its corporation.

Such a successor will need to ensure Intel's profits keep flowing while working to get it back on track with delivering 10nm chips.

That might involve Intel breaking its tradition of hiring from within its own ranks and looking for an external candidate for the top position.

But that's likely to take some time, so one can expect Intel to continue tick-tocking along for the time being.