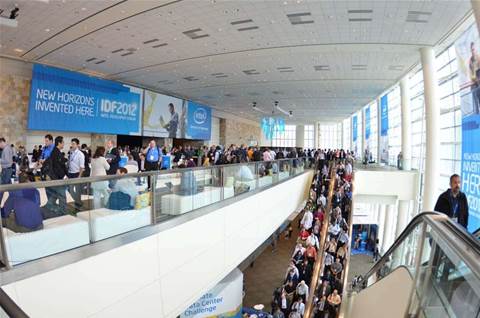 Intel isn't planning on moving away from its Moore's Law strategy for transistor development anytime soon, with die sizes as small as 10nm already on its research radar for 2015.

That was the message delivered by Mark Bohr, Intel senior fellow and director of the chip maker's Process Architecture and Integration group, during a session at the Intel Developer Forum (IDF) in San Francisco last week.

Bohr walked through Intel's transistor roadmap for the next few years, ensuring attendees that Moore's Law -- or the development strategy through which Intel doubles the number of transistors on its chips approximately every two years -- is alive and well.

Moore's Law was most recently demonstrated with this year's launch of its 22nm third-generation Ivy Bridge Core processors, and it is already paving the way for production of a new line of both 14nm CPUs and system-on-a-chips (SoCs), code-named Skylake, for 2013.

"The 14nm technology is in full development mode now and on track for full production readiness at the end of next year," Bohr said.

Every new generation of chips pumped out based on Moore's Law delivers lower levels of power consumption and higher speeds than its predecessors. In Ivy Bridge's case, Bohr said, the 22nm processors yielded a 20 percent performance boost on multi-threaded applications and doubled the processing speeds for media applications over the prior-generation, 32nm Sandy Bridge processors, all while consuming nearly 20 percent less power.

While 10nm processors, code-named Skymont, are on tap for 2015, 7nm and 5nm architectures are also in the pipeline beyond that, Bohr said. And as Intel's die continue to shrink in size and offer greater levels of power efficiency, they become more and more suited for use in smaller hardware devices, such as smartphones and tablets.

"Of course, we are doing that to support a wider range of products, from high-performance server and desktop products ... to low-power and low-leakage transistors for ultrabook, tablets and pocket-device applications," Bohr told attendees.

Intel's adherence to Moore's Law and its planned development of 14nm chips for 2013 places it ahead of rival chip makers AMD and ARM, who are currently eyeing 20nm architectures. Part of this could also be because Intel manufacturers its chips at its own facilities, while AMD and ARM work with partners or third-party fabs such as Global Foundries.

Cloud application revenue made easy
By Kristin Bent
Sep 17 2012
8:03AM