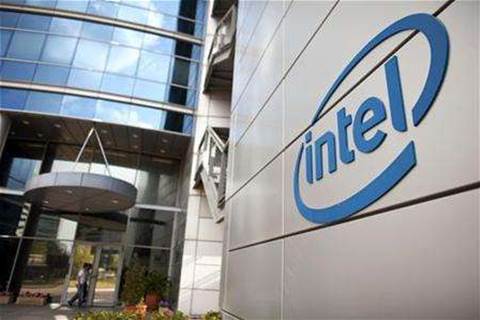 An Intel logo is seen at the company's offices in Petah Tikva, near Tel Aviv October 24, 2011. Credit: Reuters/Nir Elias/Files

Intel CEO Paul Otellini will retire in May, as the world's leading chipmaker grapples with weak PC demand and an industry shift toward mobile computing.

Intel said it would consider both internal and external candidates for the CEO position and it expected the "leadership transition" to last six months.

Otellini is leaving before Intel's mandatory retiring age for its CEOs, 65.

Intel, whose processors are dominant in personal computers, has been slow to expand into the fast-growing mobile industry, where Apple's iPads and iPhones and other popular mobile devices use competing technology from Britain's ARM Holdings.

"We all know that everyone is using smartphones and tablets now. It's the era of Intel versus ARM, so it may be good to come in with some fresh blood and a new perspective," Evercore analyst Patrick Wang said.

Intel said it would promote three executives to executive vice presidents. They are Renee James, who is in charge of Intel software; Brian Krzanich, who is chief operating officer and oversees manufacturing; and Stacy Smith, the chief financial officer and director of corporate strategy.

Smith, well-known by Wall Street, and Krzanich have in the past been viewed as potential future CEOs.

"There is a comfort level with Stacy (Smith)," said Williams Financial analyst Cody Acree. "I think we'd get more continuity with the current roadmap and direction than you would with anybody else."

Krzanich, a three-decade Intel veteran, made a name for himself improving the efficiency of the chipmaker's cutting-edge factories. He was promoted to chief operating officer last March, effectively throwing him in the running for the CEO position.

Analysts said James' focus on software instead of hardware made her less likely to be promoted to CEO.

Since it was founded in 1968, Intel has had a history of promoting CEOs from within. But the increasing belief that the "PC era," which Intel helped create, may be drawing to a close could lead Intel's board to choose an external candidate with experience in mobile, analysts said.

"Previous CEO transitions have all involved carefully groomed internal candidates. But if Intel's Board is now looking externally -- to bring in new skills -- that would explain the lack of a named successor and length of time in transition," said Longbow Research analyst JoAnne Feeney.

With economic growth slowing in China and struggling in Europe and the United States, global PC shipments are expected to decline slightly this year, the first annual drop since 2001.

The top chipmaker is currently running its factories at less than 50 percent of capacity, redirecting unused space and equipment to be used on more cutting-edge production lines still being built.

Otellini, 62, was the company's fifth CEO, stepping into the post in the second quarter of 2005. He worked at Intel for nearly 40 years — most of its history.

The California-based company has long been accustomed to being king of the PC market, particularly through its historic "Wintel" alliance with Microsoft, which led to breathtakingly high profit margins and an 80 percent market share.

But it has struggled to adapt its powerful PC processors to be used in smartphones and tablets that depend on batteries. Its market share is less than 1 percent of smartphones, trailing Qualcomm, Samsung Electronics, ARM Holdings and others.

That leads some investors, who are already concerned about a lacklustre global economy, to ask if Intel's invincibility has come to an end and whether the company's potential for profit and revenue growth may be limited.

Eliminating departmental friction within MSPs
By Liana B. Baker
Noel Randewich
Nov 20 2012
8:02AM