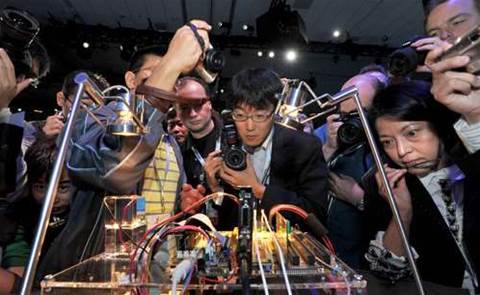 Intel and Google ﻿will work together to develop mobile phones running Android.

The announcement was made during Intel boss Paul Otellini's keynote speech at the company's developer forum in San Francisco.

After demonstrating a concept chip that can be powered by a solar cell the size of a postage stamp, Otellini was joined on stage by Andy Rubin, senior vice president of mobile at Google. 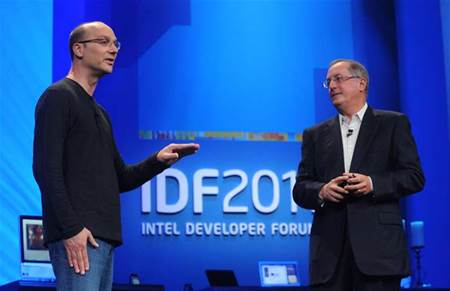 Andy Rubin and Paul Otellini outline the future of Android on x86 devices
The companies said they planned to collaborate on Android releases being optimised for Intel’s Atom processor, showing off two form factor reference designs for Atom powered development and enabling for Intel.
Smith revealed that Intel plans to align the Atom roadmap to match that of the Xeon and Core chips. The Atom 'Silvermont' 22nm chip is scheduled for a 2013 date, matching that of the 'Haswell' architecture for the next generation Core CPUs. Intel is aiming to sync up development of Atom and Core with the move to 14nm around 2014.
To achieve this, Intel will essentially be “doubling the pace of Moore’s law” for the Atom System-on-a-Chip family according to Smith, with the transition from the 32nm 'Saltwell' to the 14nm 'Airmont' occurring within a 3 year period.
Intel will be implementing a unified design approach in order to meet these milestones, with the Core and Atom product development teams being brought together rather than continuing to operate as separate and staggered teams.
Smith also further expanded on the tablet form factor reference design shown off by Otellini, saying that the device ran on 22nm Medfield chipset, making it – according the Smith – “the world’s first x86 based Android tablet”, although he was quick to point out that consumer products were some time off.

Nic Healey is attending Intel Developers Forum as a guest of Intel.

Eliminating departmental friction within MSPs
By Nic Healey
Sep 15 2011
6:46AM