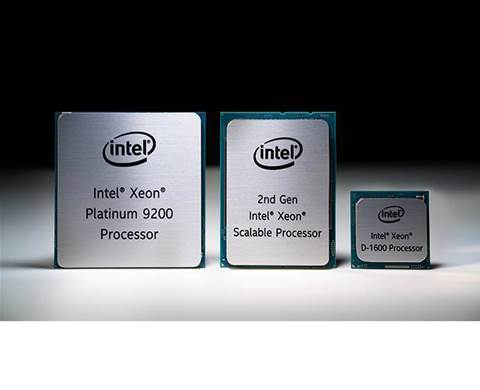 Intel is looking to redefine data centre performance with the introduction of its new second-generation Xeon Scalable processor series.

It represents the most comprehensive Xeon stack Intel has ever delivered, with over 50 standard SKUs with dozens of custom SKUs ranging from eight to 56 cores, Shenoy said at the company's data centre product launch in San Francisco.

The processors can be configured in servers with one to eight sockets, and support Intel's new Optane Data Centre persistent memory modules with up to 4.5 TB of memory per socket.

"This product represents deep technical investment in both the memory technology as well as the CPU controller that allows us to break through the memory economics that have held back application developers for decades," he said.

Intel has also added some new architectural elements to its second-generation Xeon Scalable processors that address some of the IT industry's fastest-growing applications, Shenoy said.

"So with the smooth platform upgrade that we're delivering here today over our prior generation of Xeon, the entire ecosystem [is] ready to ship now so that customers can immediately take advantage of all this innovation," he said.

The highest-performance member of the new processor family is the Xeon Scalable Platinum 9200, Shenoy said.

"It's been designed from the ground up for data-intensive applications: high-performance computing, analytics, artificial intelligence," he said. "This product, the Xeon Platinum 9200 processor, delivers leadership performance. We previously disclosed SKUs up to 48 cores on this product. Today … we're actually scaling the product up to 56 cores, or 112 cores in a two-socket system with 12 channels of memory support."

The Platinum 9200 processor has a unique design where each CPU core has access to the expanded memory interfaces, Shenoy said.

"What's particularly exciting to me is, I can remember a day and a time where, to deliver a teraflop of performance, we needed this entire room [filled with] computers," he said. "Today, we have 3 teraflops of compute in the palm of my hand. It's truly a beast."

"[It's] the only CPU architecture with integrated AI acceleration, with a combination now of hardware and software improvements on DL Boost," he said. "[It's] pushing 14X deep learning improvement from the Xeon Scalable first generation. … And with the Platinum series, we're seeing a further 2X beyond that."

Jennifer Huffstetler, vice president and general manager of Intel's data centre product management team, told CRN that Intel has no plans to discontinue production of its original Xeon Scalable processor series despite the general availability of the second-generation models.

"Sometimes these products have long embedded life cycles because of things like security or imaging support," Huffstetler said. "But we're seeing any end use cases starting to qualify for the second generation."

Despite the new capabilities of the new processor line, ISVs are under no pressure to change their applications for the second-generation Xeon Scalable processors, Huffstetler said.

However, she said, Intel is providing a library of software that ISVs can use to optimize their applications for new capabilities such as DL Boost.

Supermicro made early shipments of over 100 servers with pre-production second-generation Xeon Scalable processors, and is preparing to configure 100 models of its X11 server portfolio for the new processors, said Jim Sangster, the Supermicro's senior director of product marketing.

"The way we look at it, when it comes to the processors, customers are getting more features for the same price," he said. "Customers will get everything faster with more features, but spend the same amount of money. Or if they just want more performance, and don't care about the new feature set, they can get it for less."