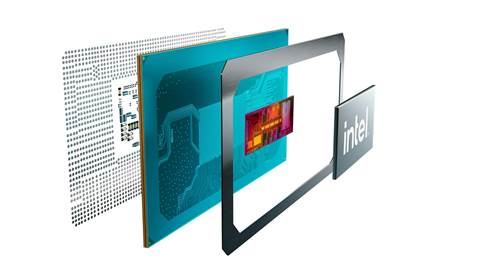 Intel has unleashed a new wave of 11th-generation Core processors, this time built for those who need a mobile workstation capable of doing heavier lifting for content creation and business applications than the increasingly popular ultra-thin laptops entering the market.

The Tiger Lake H CPUs — which include five consumer variants aimed at gaming and content creation — are expected to go into more than 80 mobile workstations this year for the gaming, content creation and commercial segments, and roughly 15 of them will use the vPro variants. The processors feature up to eight cores and, for the first time with Intel’s 10-nanometer manufacturing process, reach up to 5GHz in frequency with Intel Turbo Boost Technology.

The chipmaker demonstrated that even the new mid-range, six-core Core i5-11400H was on par with AMD’s Ryzen 9 5900HX. For Hitman 3, Total War and War Thunder, the new Core i5 processor was only a few points short of reaching the frames per second provided by the Ryzen 9. In GRID 2019, Far Cry: New Dawn, Rainbow Six Siege and Troy: A Total War Saga, the Core i5 provided 3 percent, 4 percent, 4 percent and 12 percent more frames per second, respectively.

“If performance improves productivity, these new CPUs will drive productivity increases,” said Christopher Yahna, senior director of product management for business client platforms at Intel, in a pre-briefing with journalists.

The Tiger Lake H processors are based on the same Willow Cove core microarchitecture and 10nm SuperFin manufacturing process that serve as the basis for Intel’s 11th-generaton Core mobile processors — code-named Tiger Lake, minus the “H” — that launched last fall for ultra-thin laptops.

While the new CPUs don’t reach the 5.3GHz maximum frequency of Intel’s 10th-generation Core H-Series CPUs that launched last year, Intel engineering executive Boyd Phelps said the Tiger Lake H chips benefited from an increase in instructions per clock and a decrease in voltage associated with the 10nm Willow Cove architecture that allowed Intel to provide better performance. This improved voltage-frequency curve allowed Intel to hit 5GHz at a lower voltage than the previous generation, he added.

“We feel pretty proud about how we’ve dialed that in, in terms of frequency, IPC power and giving the best overall experience we can,” he said.

“One of the benefits of the Intel architecture and the Tiger Lake H product family is you get to take advantage of all the XPU goodness that we have built into the product, as well as getting the core, frequency and IPC improvements that you see with this generation,” he said.

The vPro variants of Tiger Lake H come with Intel Hardware Shield, a set of silicon-level security features that protects the system underneath and above the BIOS level and uses GPU resources to perform advanced threat detection workloads, lowering the strain on the CPU.