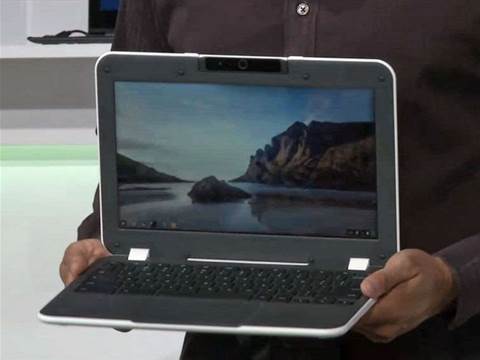 Intel and Google have unveiled a new generation of Chromebooks based on Haswell Core i3 and Bay Trail Atom processors - bringing the total Chrome OS market to more than 20 devices by the end of this year.

Core i3 models are confirmed by Acer and Dell, with Acer’s model set to go on sale in the US this summer at $US349. The new devices promise a significant step up in horsepower from existing models using Celeron-branded processors.

“As HTML5-based apps do things like applying photo effects, or face detection, you’ll see the importance of performance,” explained Navin Shenoy, Intel vice president and general manager of the mobile computing group. Browser-based gaming and Google Hangouts were also singled out as applications that would benefit from greater processing power.

For those seeking a more lightweight device, 11.6in and 13in Chromebooks based on the Bay Trail SoC were revealed by Asus, Acer, Lenovo and Toshiba, with US launch dates again set for this summer. Interestingly, Lenovo’s $US329 N20P will include a touchscreen, a feature rarely seen on such devices - although precedents include Lenovo's own ThinkPad Yoga 11e, Acer's C720P and the Chromebook Pixel.

Shenoy predicted that a Bay Trail Chromebook could deliver 11-hour battery life, as well as thinner and lighter designs than were previously possible - including the first fanless Intel-based Chromebooks. He also promised that the coming generation of Bay Trail-based Chromebooks would for the first time bring 802.11ac to the platform.

A new ChromeBox - and the first ChromeBase

Shenoy also demonstrated a new HP ChromeBox, a striking turquoise creation similar in appearance to the Intel NUC, and the first “ChromeBase” – a 21in all-in-one design from LG set to launch in the US later this month at $US349.

He wrapped up with the announcement that Chrome OS devices would be among the first to use “conflict free” processors, eschewing any materials from sources that finance African warlords.

“Every Chromebook keeps getting better over time,” he declared. “This is what differentiates it from every other laptop on the market.”

“We’re adding Google Now and voice actions into Chromebooks, so in the next weeks and months you’ll be able to do stuff with your laptops that’s never been done before. And within the next few weeks, Chromebook users will be able to watch their favourite movies and TV shows not only online, but also offline in the Google Play movies app.”

“Now, if you’re in an aeroplane, or you’re deep underground without the network, you can choose to be productive with Google Docs – or, completely unproductive with TV shows.”

Cloud application revenue made easy
By Darien Graham-Smith
May 7 2014
10:01AM