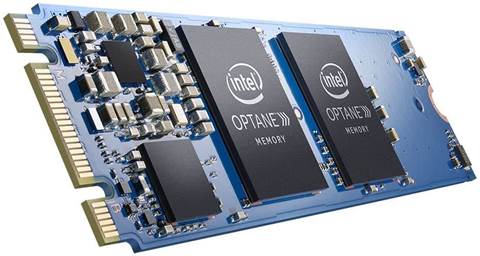 Intel believes Optane memory technology is a “disruptive, once-in-a-decade invention” that requires a system-level approach to enable performance gains and other benefits for data-intensive workloads. NAND SSD technology can’t deliver on the same level of performance and reliability but remains a large, important and economical part of the storage equation — albeit in the hands of a different owner.

Those were two of the takeaways from Intel executives and architects speaking at the company’s virtual Memory and Storage Moment event last week, where the chipmaker revealed new Optane memory and SSD products as well as new NAND SSD products, covering both the data center and PC markets.

“NAND needs greater scale to go after the world‘s insatiable appetite for more data, and Optane needs platform-connected solutions to focus on faster insights on that data,” said Rob Crooke, senior vice president and general manager of Intel’s NAND Products and Solutions Group, who plans to join SK Hynix and lead the division there once the acquisition is completed.

Among the new products revealed at the event was the Intel Optane SSD P5800X, which the company called “the world’s fastest data center SSD,” promising a three-fold increase in random mixed read and write IOPS and in higher sequential bandwidth as well 40 percent better quality of service and 67 percent higher endurance than the previous generation Optane SSD P4800X.

Frank Hady, Intel fellow and chief Optane systems architect, said Optane SSDs are addressing a growing problem with NAND SSDs: performance per gigabyte is going down as storage density increases, which poses a bottleneck to the increasing number of cores in CPUs for data centers.

“This means that the absolute hottest storage data is becoming more difficult to access with high performance,” he said.

In one instance, the Optane SSD P5800X’s significantly improved quality of service over NAND SSDs means customers and partners can offer higher-cost, premium tiers of storage with lower latencies. In another, Optane SSD P5800Xs can be used to perform small block writes, reducing the stress on NAND SSDs and extending their life by up to 20 times, which also reduces SSD capacity costs.

“You’re taking advantage of the performance of Optane to collect all this data into a bigger chunk,” said David Tuhy, vice president and general manager of Intel’s Data Center Optane Storage Division. “So you get performance because Optane is super-fast in reads and write and then you get the efficiency because you‘re only landing very large stripes of data fully optimized to the [triple-level cell] NAND.”

Tuhy said more than 40 percent of Fortune 500 companies have adopted Optane SSDs. Among the customer base is Alibaba Cloud, which has been able to reduce transaction costs for latency-sensitive workloads, and Telefonica, which has used Optane SSDs to meet stringent service-level agreements.

Just as NAND SSDs aren’t properly scaling with the increasing performance demands of data center applications, DRAM memory is also falling behind, which is why Intel believes Optane can serve as an important complement on the memory side too.

“Since the advent of multi-core processors, processor core count growth has outstripped memory capacity growth,” Hady said. “Meanwhile in the data center, with each core potentially running a different instance, capacity need per core is increasing at a greater rate. Taken together, this means the capacity provided by DRAM is falling short of the need.”

Intel Optane Persistent Memory is addressing this gap with its high capacity, affordability, storage-like persistence and performance that is nearly as fast as DRAM.

The company launched a second-generation version of the product, Optane Persistent Memory 200 Series, alongside the Xeon Scalable Cooper Lake processors earlier this year. And Intel also reaveled that it will release a third-generation product, code-named Crow Pass, alongside a future generation of Xeon Scalable processors known as Sapphire Rapids. (Intel had previously said Sapphire Rapids would launch in 2021, but in last week’s presentation, the company gave no year for its release, only saying it would come out in the future following the Xeon Scalable Ice Lake processors next year.)

Because of Optane Persistent Memory’s unique capabilities, it can serve as low-cost memory, with Optane’s Memory Mode, as well as a super-fast storage device, with App Direct Mode, according to Alper Ilkbahar (pictured), vice president of Intel’s Data Platforms Group and general manager of Intel Optane Group, which was formed as a result of the SK Hynix deal and falls under the Data Platforms Group.

More than 475 customers are using Optane Persistent Memory in production environments, which includes 200 Fortune 500 customers, Ilkbahar said. About 60 percent of customers are using Optane Persistent Memory Mode, which can be used without any modifications to applications, with the other 40 percent using App Direct Mode, which requires application modifications or an abstraction platform like MemVerge’s Memory Machine.

Ilkbahar said customers are typically using Optane Persistent Memory for one of two reasons: to save money on memory capacity using the product’s Memory Mode or to get more value out of their IT investments, largely through App Direct Mode, which he sees becoming the bigger use case over time.

“This is typically happening when you have applications that are memory-bound and memory was the bottleneck,” he said. “By giving our customers more memory [at an affordable] cost point, they were able to unleash the true capabilities and potential of their investments.”

Intel provided multiple examples of how customers have been able to improve performance or save money with Optane Persistent Memory.

Oracle, for instance, is using Optane Persistent Memory for its Exadata X8M platform, which allowed the vendor to use Optane as a cache for frequently used data to accelerate database updates by 2.5 times while also improving latency by 10 times. Other examples include SoftBank saving 41 percent on infrastructure costs, SK Telecom roughly doubling the number of virtual machines for 5G multi-access edge deployments and Siemens loading SAP HANA databases 15 times faster.

Optane isn’t meant for just the data center market, however. During Intel’s Memory and Storage Moment event, the company also revealed Intel Optane memory H20, an M.2 module due out in the second quarter of next year that combines Optane memory and an Intel QLC NAND SSD to improve performance, reduce latencies and lower power consumption for PCs.

But with Intel’s plan to sell its NAND division to SK Hynix, the chipmaker is tightening its focus in the storage and memory space with Optane, which Navin Shenoy, executive vice president of general manager of the Data Platforms Group, called a “disruptive, once-in-a-decade” invention.

Kent Tibbils, vice president of marketing at ASI, a Fremont, Calif.-based Intel distributor, agreed that Optane is a “disruptive” technology, which can help channel partners increase sales and improve profitability because of how it can lead to new kinds of server configurations.

“The broader part of the opportunity for most of the channel will be with the Optane SSD,” he said. “And it‘s exactly in that kind of scenario or configuration that Intel is talking about, where you want to leverage the performance benefits of Optane in your storage array as a cache.”

Tibbils said Optane SSDs don’t make sense as primary storage because they’re more expensive than NAND SSDs, but when acting as a cache, they can improve overall performance of the system while also allowing NAND SSDs to last longer.

“Optane can take all the brunt of all those writes that would normally be going to your storage tier, and by doing that, it extends the life of your SSD drives,” he said. “Everybody knows SSD drives have a limited lifespan for how many times you can write to them, so if you can extend that, then you‘re ultimately saving the customer money down the road when they have to replace those SSD drives.”

Tibbils said ASI has been working with select reseller customers this year on how to configure servers with Optane SSDs and effectively sell Optane-based solutions to end customers, but the process has taken longer because of lockdowns and other measures to combat the coronavirus pandemic.

Eliminating departmental friction within MSPs
By Dylan Martin
Dec 23 2020
9:30AM