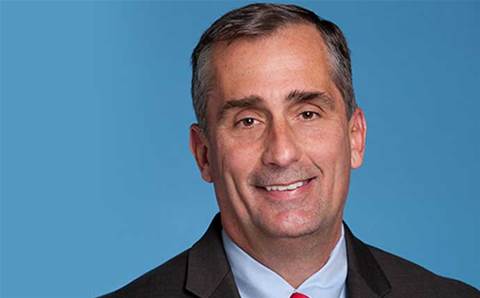 Intel CEO Brian Krzanich has resigned after the company learned of a prior consensual relationship the chief executive had with an employee.

Swan became CFO in October 2016 after previously holding that position with eBay and with Electronic Data Systems.

In a press release Thursday, Intel said an ongoing investigation by internal and external counsel confirmed that Krzanich had violated the company's non-fraternisation policy. The relationship with the employee happened "some time back," and the company was only made aware of it recently, CNBC reported, citing people familiar with the situation.

"The board believes strongly in Intel’s strategy and we are confident in Bob Swan’s ability to lead the company as we conduct a robust search for our next CEO," Intel chairman Andy Bryant said in a statement.

"Bob has been instrumental to the development and execution of Intel’s strategy, and we know the company will continue to smoothly execute. We appreciate Brian’s many contributions to Intel."

The company said it has begun a "robust" search for a permanent CEO, which will include consideration for both internal and external candidates. An executive search firm will assist in the process.

With Intel's 50-year-anniversary in less than a month, the leadership shakeup is happening as the company has been investing heavily in transitioning the company from a PC-centric business to one that focuses on data. In the first quarter, data-centric revenue reached 49 percent of sales, an all-time high.

"As Intel marks its 50th anniversary, we're well positioned to be the end-to-end platform provider for the new data world and a leader in the artificial intelligence and the autonomous revolution," Krzanich said during the company's first-quarter earnings call earlier this year.

Krzanich's resignation comes as the company faces some significant challenges. Intel has been making efforts to become more proactive around security matters this year after the Spectre and Meltdown processor vulnerabilities were disclosed in early January.

It has also been grappling with a manufacturing process for a next-generation chip that has been delayed multiple times, which an executive at archrival AMD recently said has given his company an "unexpected" advantage.

Krzanich was a longtime employee at Intel, having first joined as an engineer in 1982. He became chief operating officer in January 2012 and was then named Intel's sixth CEO in May 2013, succeeding Paul Otellini, who had served in the role since 2005 and died last fall.

The company said it expects to have a record second quarter, with revenues of US$16.9 billion and net earnings of 99 cents per share. The company's full second-quarter results will be reported on July 26.

"Intel’s transformation to a data-centric company is well under way and our team is producing great products, excellent growth and outstanding financial results," Swan said in a statement. "I look forward to Intel continuing to win in the marketplace."

Intel did not immediately respond to request for comment Thursday morning.