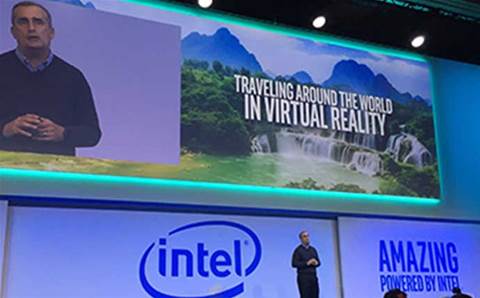 Intel chief executive Brian Krzanich's focus in his CES keynote this year wasn't on processors but instead on how the chip giant was providing the compute power behind today's coolest virtual reality experiences.

"We believe [VR] is a game-changer," Krzanich said to an audience at CES in Las Vegas.

"We can't talk about virtual reality without talking about merged reality. It's being driven by technology that Intel has been developing, like RealSense and our Project Alloy."

Intel's Project Alloy is an all-in-one merged reality headset providing an immersive experience with RealSense technology. Krzanich said the headset, first launched in August, would start to be produced in the fourth quarter of 2017 through Intel's partners.

Project Alloy capitalises on the concept of merged reality (a combination of virtual and augmented reality) which means that users can see others using the headset, and there is seamless tracking built into it that enables a physical room to transform into a virtual room.

Krzanich stressed the importance of virtual reality in various areas: "The physical and visual worlds are emerging," he said.

For instance, virtual reality can have an impact in a work setting with solar panel inspectors, said Krzanich. Solar panels need to be inspected regularly, but if VR capabilities are added to a drone the inspectors can look wherever they want in 360 degrees, enabling the inspection to be executed remotely.

Ted Schilowitz, co-founder of Intel partner HypeVR said his company had made what it called the first walk-around VR experience, allowing users to actually move around within a virtual reality environment. Schilowitz said Intel technology was at the heart of that experience.

"We want to advance the concept of what video is at its core," he said. "This requires massive amounts of computing, which is why we partnered with Intel."

Intel also is trying to change the game around how virtual reality impacts sports and entertainment.

"You can be transformed to a sporting event, a concert, or even the front seat of an awards show," said Krzanich.

"With any new technology, it's always been about hardware and software, or content," he said. "We think these experiences are where virtual reality is going."