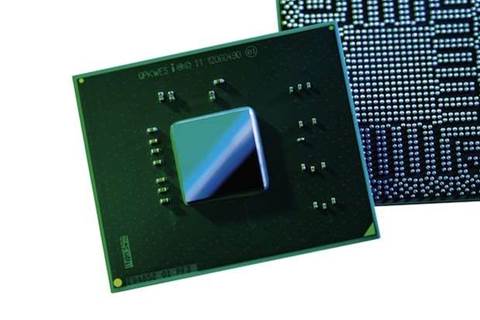 Intel today grew its Atom family of low-power processors with the launch of its Atom S1200 line-up, targeted at high-density microservers.

The new Atom S1200 family, code-named Centerton, is the world's first 64-bit system-on-a-chip (SoC) that can deliver server-class reliability, without driving up power consumption levels or overall data centre costs. The Atom S1200 is aimed largely at customers providing cloud or web-hosting services, along with those using lower-end storage and networking systems.

"With the launch of Atom, we see design wins across the full spectrum," said Diane Bryant, head of Intel's data centre group. Bryant said the Atom S1200 family already has 20 design wins with vendors including Dell, Supermicro and Huawei. The new SoCs are also being used in Hewlett-Packard's first wave of its Project Moonshot servers, code-named Gemini.

The new Atom S1200 family also delivers 64-bit support, meaning they are fully compatible with all existing 64-bit software based on Intel's x86 architecture. For customers already leveraging x86-based and 64-bit systems in their data centres, Bryant said the transition to the new Atom SoC would be "truly seamless."

"There is a massive install base of applications, middleware, operating systems that all just simply run on the Atom SoC," Bryant said. "And we have large software providers like Red Hat and Oracle that can speak first-hand to the benefits of having a single hardware architecture running in your data center."

Intel's new Atom S1200 series is shipping now and will go head to head with server processors from ARM, whose processors are commonly found in mobile devices such as smartphones and tablets and have been making their way into the data center because of their ultra low-power designs.

But according to analyst firm Pund-IT, the new Atom S1200 SoC puts Intel "several steps ahead of where any ARM-based" chip maker is today, mainly because processors based on ARM's next-generation 64-bit architectures aren't slated to launch until at least 2013.

"ARM-based microserver development is certainly intriguing, especially given the involvement of systems vendors like Dell and HP, but we believe that at least some of these solutions will be slower out of the gate than many expect," wrote Charles King, principal analyst at Pund-IT, in a research note.

Long-time Intel rival AMD announced in October its plans to launch a 64-bit ARM-based microserver processor under its Opteron series brand. The chips are slated to launch in 2014, and AMD told CRN it plans to stick to that timeline.

"2014 is not very far away in the world of box-building," said Andrew Feldman, general manager of AMD's data centre server solutions group and former CEO of SeaMicro, the microserver vendor AMD announced it was acquiring in February. "That means people see a lot of parts in the latter part of 2013, and we begin shipping in 2014. That's just around the corner."

Looking ahead, Intel said it is already working on its next-generation Atom SoC code-named "Avoton," which should be available sometime next year and leverages the chip maker's tri-gate 22-nm transistors.

Cloud application revenue made easy
By Kristin Bent
Dec 12 2012
7:50AM