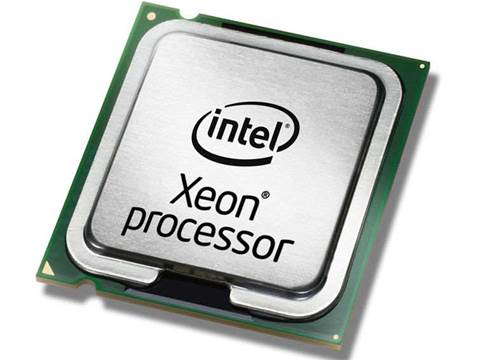 Intel has launched its new generation of Xeon processors, intended for use in servers and workstations.

The announcement introduces a new naming convention for Xeons: the new high-end parts are called the E7 series, while a range of more modest chips is dubbed E3. Systems using the new parts are expected to begin shipping immediately.

The E7 range takes in 18 different models with different processor speeds, cache configurations and cores. It’s based on the 32nm Westmere-EX architecture, similar to that found in last year’s consumer Core i3, i5 and i7 processors, but with greatly beefed-up specifications.

The top-end part, the Xeon E7-8870, runs at 2.4GHz and boasts a massive 30MB cache shared between ten CPU cores. Over a QPI bus (rather than the mainstream DMI used by consumer chips) it can address up to 2TB of system RAM – twice the capacity that last year’s Xeon 7500 chips are able to use.

Thanks to their Westmere heritage, E7 models support Intel’s Turbo Boost technology and Hyper-Threading, allowing some models to service up to twenty concurrent threads.

These capabilities are supplemented by Intel’s double-device data correction (DDDC) system, transplanted from the Itanium series, which allows the system to detect and correct two-bit memory errors. And Intel’s Trusted Execution Technology (TXT) can be used to prevent unauthorised code running on virtual machines, providing a high level of hardware-enforced security.

The E3 series, intended for workstations and smaller servers, are based on the newer Sandy Bridge architecture, which Intel claims gives a 30% performance boost over previous low-end Xeons.

Most E3 models are quad-core designs with 8MB of cache, and include Intel’s onboard HD Graphics, to keep power consumption low. E3 chips will be introduced at comparatively affordable prices, ranging from $189 to $612 wholesale.

Speaking to PC Pro before the launch, Richard George, Intel’s enterprise channel director, confirmed that Sandy Bridge would “trickle up” from the E3 series into future generations of high-end Xeons.

Intel’s launch partner Dell confirmed that it would shortly be offering Xeon E7 processors in several of its PowerEdge servers, with E3-based products to be announced imminently.