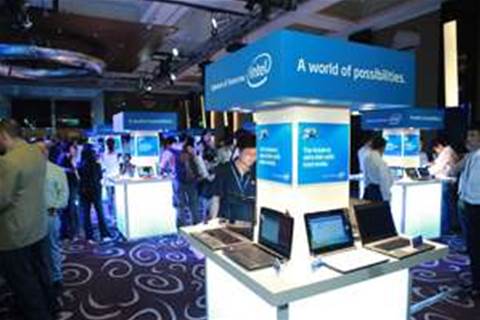 At Intel Developer Forum in San Francisco, Intel today launched the AppUpSM app store for consumers. The AppUpSM store will feature free and paid apps for netbooks based on Intel's Atom processor.

Apps include a range of games from Konami, Aspyr and Sega, among others.

One of the more exciting developments announced was that Havok, which works on realistic soft tissue, cloth and destruction technology in games, will be available as an SDK for Atom games developers. This will mean that AppUp store should provide some great games in the near future.

There's far more than games available, however: we'll take a walk through the storefront in San Francisco later today.

The app store for AppUp is designed to run on Atom netbooks, though those netbooks need to be running Windows or MeeGo. The plan is to expand the AppUp apps across all Atom-based devices, whether they be TVs, smartphones or embedded in-car systems.

In the UK, India and USA, Intel will have an in-store "AppUp Centre" in selected major retailers, to help consumers to obtain new apps to their netbooks. AppUp will also be pre-installed on all netbooks sold through those retailers: Best Buy in the US, Dixons in the UK and Chroma in India.

There's no information about an Australian-based retail partner for AppUp, however, so any hopes that you might be able to walk into a store and get news apps for your netbook are in vain for now.

What we should see here in Australia are some vendors installing AppUp on netbooks, however. Asus will be shipping the Asus App Store on its Eee PC netbooks starting October, and others are bound to follow.

So what will it mean for those of us in Australia? Given that most netbook applications are already downloaded, as well as purchased online, it will really only function as a central repository.

Having said that, Intel clams that AppUp apps are optimised for Atom processors. Hopefully we'll get to test that out in the near future.