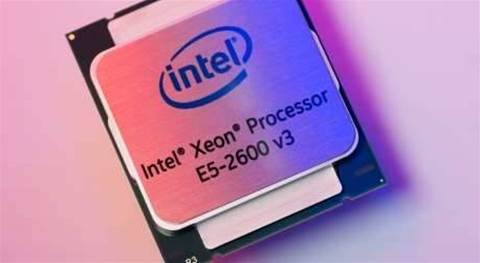 Intel launched its latest Xeon family of processors that boasts as many as 18 cores, a 3x performance boost, and support for DDR4 memory for fast application performance in a world quickly moving to software-defined architectures.

The new processor families, known as Grantley, consist of the E5-2600 v3 and E5-1600 v3 processors. Intel unleashed 32 SKUs and an additional 20 custom SKUs designed for customers and their specific workload needs.

A host of system vendors have rolled out servers with the new Intel chip - including Cisco, Dell, Fujitsu, Hitachi, HP, Huawei, IBM, Lenovo, NEC and Oracle.

The new processor, which uses the Haswell architecture, has up to 50 percent more cores and cache compared to the previous generation processor. The new Xeon is also the first to support DDR4 memory. Intel representatives said DDR4 would provide 25 times higher performance than DDR3 at lower power consumption.

Intel already has a flagship customer under its belt in Australia, with the chip chosen for the latest upgrade to supercomputer Magnus. The machine is described as the "most advanced" scientific supercomputer in the southern hemisphere.

The Cray XC30 machine uses has over 35,000 cores and is capable of petascale processing in excess of a petaflop, which is one quadrillion floating point operations per second.

The upgrade has been described as a "significant milestone in Australia’s scientific history", with Magnus to be used across a variety of research fields, including mining, geoscience, engineering, materials science and bioinformatics.

The machine is located in the Pawsey Supercomputing Centre in Perth, which has been operating since November 2013. Access is provided by iVEC, which is a joint venture between Western Australian universities and the CSIRO.

Intel representatives said that iVEC was one of less than 100 customers and the only one in Australia given early access to the new Xeon E5 processor.

"With the new Xeon chips we move to a software-defined world – from static to dynamic, from siloed to open, and from proprietary to open standards running on standard architecture," said Diane Bryant, senior vice president and general manager of Intel's Data Centre Group, at the unveiling of the new processors.

Another highlight includes a performance increase with up to a 3X boost in horsepower compared with previous Ivy Bridge generation processors.

The move to software-defined infrastructure is inevitable and necessary, Bryant said. Intel's Xeon processors are optimised for that transition with nearly 50 SKUs optimised for specific customer needs, she said.

Intel's Xeon chip news coincided with the flurry of new system announcements from Cisco Systems, Hewlett-Packard, Lenovo, Dell and IBM. Intel said that as of Monday's launch there are 65 servers shipping from various OEMs with hundreds more to launch later this year.

Cisco refreshed its UCS server line with two major additions based on the Xeon processor. The first is a new line of modular servers dubbed the Cisco M-Series. The line features a new Cisco 2U chassis that fits up to eight compute modules, each of which consists of two independent Intel Xeon E3 servers.

By putting 16 servers in 2U of rackspace, Cisco is focusing on high-density implementations. And rather than including storage and networking on each server, the eight modules share four SSDs and dual 40-Gbit Ethernet connectivity.

Cisco also took the wraps off the UCS Mini, which uses existing B-Series blade chassis and blades, but adds the Cisco UCS 6324 Fabric Interconnect, a small device that plugs into the back of the chassis.

Prior to the Intel Grantley launch, HP told CRN US it plans to introduce 21 new platforms as part of its ProLiant Gen9 family through fiscal year 2015, with the higher performance of the new processors to be married to RESTful APIs, a modular architecture to increase configuration flexibility, and HP's OneView infrastructure management application for both physical resources and clouds.

On Monday, Lenovo showed it is pushing ahead on development of its own ThinkServer line despite the pending acquisition of IBM's server business. The Beijing-based company is unveiling two rackmount and one tower server that use the ASHRAE A4 control standard to run at 113 degrees Fahrenheit continuously to significantly cut cooling requirements.

The new Lenovo servers also include the company's AnyRAID solution, which allows any RAID adapter to connect to the server backplane; AnyFabric to allow choice of networking fabric; and AnyBay technology to allow the use of any SAS, SATA or PCIe drives. They also feature an M2 connector for miniature SSDs that can be used to decrease boot time.

Dell on Monday touted flash storage and ease of management in its new 13G (generation 13) server line. One new model has a tier of 18 1.8-inch SATA SSDs paired with a tier of eight 3.5-inch spinning drives that takes advantage of the Microsoft Storage Spaces to manage the tiers.

Dell also added a common connector that allows SATA, SAS and PCIe flash and spinning drives to be easily added depending on requirements.

On the management side, Dell introduced ZeroTouch, which allows servers to automatically configure themselves once installed. Another new capability is iDRAC QuickSync, which Dell said makes it the first server vendor to provide NFC-enabled technology that allows an administrator to get server updates via a smart device just by tapping the device to the server. Dell also introduced iDRAC Direct, which automatically configures servers by plugging in a USB drive.

IBM, meanwhile, unveiled its M5 portfolio of x86 servers, with an emphasis on security, efficiency and reliability. As it readies the sale of its x86 business to Lenovo, the company is taking additional steps to quell any concerns over security with a revamp of its Trusted Platform Module that includes more encryption features and support for a new Secure Firmware Rollback feature that prohibits any unauthorised updates of previous firmware versions.

IBM's product mix includes System X servers that range in configuration from 1U to an all-in-one 5U, two-socket rack and tower designs. The new Xeon chips also will power new Flex System and NeXtScale systems aimed at high-density and energy-efficient enterprise workloads.