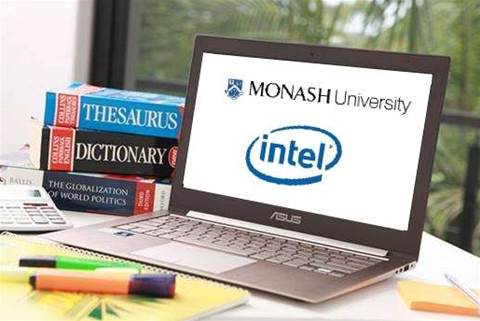 The chip maker reported a quarterly revenue of $US13.5 billion ($A13bn), which is flat year over year. Net income for the quarter was $US3 billion, marking a 5.1 percent jump compared to the $US2.8 billion it brought in during the same period last year.

"We believe that Q3 PC sales grew approximately half of the seasonal norm, and reflected flat enterprise sales," Intel CEO Paul Otellini said during a conference call with analysts.

Intel said its PC Client Group saw an 8 percent year-over-year revenue drop, pulling in $US8.6 billion during the three-month period. Its Other Intel Architecture Group, which produces a range of embedded solutions, including radio frequency transceivers for mobile phones and processors targeted at netbook and tablets, was down 14 percent year over year.

Intel's Data Center Group, however, represented a bright spot, pulling in $US2.7 billion in revenue, which is up 6 percent year over year.

"As we look into Q4, we believe that the overall PC business will grow at about half of what we would expect from normal seasonality," Otellini said. "Our revenue forecast growth is below these levels, as our customers are taking a cautious inventory approach in the face of market uncertainty and the timing of the Windows 8 launch."

Intel emphasised its new focus on the tablet and smartphone markets as future sources of growth. The company said more than 20 tablet designs based on its new Z2760 "Clover Trail" Atom processors are already in the pipeline, with launches expected to start in the fourth quarter and continue into 2013.

Clover Trail, according to Intel, is able to support tablets as thin as 0.34-inches and as light as 1.5 pounds, while reaching speeds up to 1.8 GHz. Lenovo was one of the first OEMs to debut a Clover Trail-based tablet, with its unveiling of the new ThinkPad Tablet 2 in August.

Intel is slowly chipping away at the smartphone space, as well, nabbing a handful of design wins with its new "Medfield" Atom processors. Several handset makers have gone to market with Intel-based smartphones outside Australia., including Lenovo and ZTE. Motorola also announced in September its new Razr i smartphone based on Medfield.

Intel, along with fellow x86-based chip maker AMD, have to battle for mobile market share against industry leader ARM, whose low-power chip architectures already fuel a majority of today's smartphones and tablets. ARM licenses its architectures to chip manufactures including Qualcomm, Samsung and Texas Instruments.

Ultrabook sales, which have been lighter than Intel's initial projections, are expected to get a boost when Windows 8, Microsoft's highly-anticipated new OS, launches on Oct. 26. Intel's Otellini re-emphasised that Windows 8 will usher in a new generation of ultrabooks poised to spark consumer demand, including those featuring new touch capabilities and convertible form factors.

"I'm very excited about [Windows 8], as I said earlier. It brings touch into the mainstream for the first time and, as we know, over the past couple of years, tablets have changed the paradigm for people to use computers. They like touch," Otellini said.

"So I think we haven’t had a chance to really judge how the consumers will embrace this in mainstream PC space or not, but I'm very optimistic," he continued.

Ultrabook prices, which traditionally have been more higher-end, are also expected to reach more "mainstream" price points over the coming months, Otellini said, which could also fuel demand.

Otellini also stressed during the call that Intel has many times undergone major market transitions and emerged unscathed. The current industry shift, in which smartphones and tablets are, in many cases, showing traditional PCs the door, will be no exception, he said, with Intel remaining optimistic about its future.

"In general, I see the computing market in a period of transition, but also a period of breakthrough innovation and creativity. Intel has a history of navigating the industry's transitions and emerging better and stronger," Otellini said.

"With a hardware and software road map that spans the smallest portable devices to the most powerful data centre servers and world leading silicon process technology, we are excited about our future."

Eliminating departmental friction within MSPs
By Kristin Bent
Oct 17 2012
10:18AM