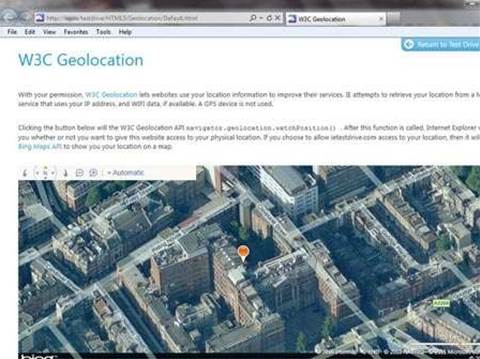 Microsoft has applied the finishing touches to Internet Explorer 9.

The company has released a feature-complete Release Candidate, ahead of the full launch of the browser. It should be available for download here.

The latest version includes a smattering of new features and performance enhancements from the beta software.

Perhaps the most significant newcomer is IE9's Tracking Protection Technology, which the company first announced in December, and is fast becoming a standard feature in all the leading browsers.

The feature is designed to stop third-party tracking companies from following you from one site to another, and targeting you with ads based on your browsing history.

IE9 will ship with a blacklist, provided by four privacy groups, of the widely used third-party trackers. The blacklist can be switched on by the user, although there's no option to block tracking outright. Microsoft claims a blanket ban would have more dire consequences, such as preventing embedded YouTube videos from playing.

Neither can users choose to add particular sites to their blacklist: "You are dependent on the people providing the lists," Mark Quirk, web product manager for Microsoft UK said.

Microsoft has also made a minor change to the Spartan Internet Explorer 9 interface. In the beta, open tabs began bunching up to the right-hand side of the address bar. In the release candidate, users can choose to drop the tabs beneath the address bar, giving them a little more room to breathe.

Internet Explorer is now the only major browser that doesn't have tabs at the top of the browser window (if you include the soon-to-be-released Firefox 4).

Microsoft is also keen to shed IE's reputation for sluggish performance. It claims the Release Candidate is 35% faster than the beta in the SunSpider benchmark, thanks to improvements to the browser's hardware acceleration.

That makes it faster than any other browser on the market, according to Microsoft, although it was benchmarking against version 9 of Google Chrome, which is soon to be superseded.

Microsoft, which was until recently dismissive of browser benchmarks, claims that translates into real-world performance gains. "We don't optimise for benchmarks, but they do happen to run well," said Quirk.

In another bid to eradicate the dark-old days of IE, Microsoft's also emphasising IE9's ever-improving support for HTML5. The browser now supports geolocation, allowing users to pinpoint their location on online maps, for example.

Grow your software revenue by selling these 5 affordable, essential tools for the modern workplace
By Barry Collins
Feb 11 2011
9:14AM