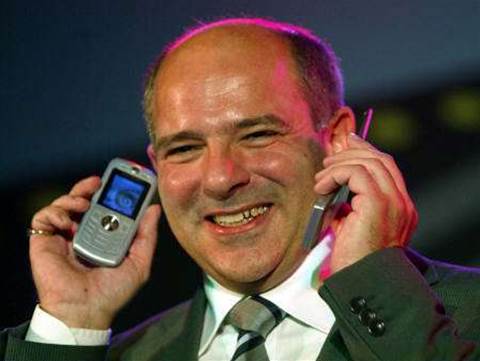 Asia's third largest economy is adding more than 2.9 million new mobile users each month thanks to the cheapest call rates anywhere, but most of the growth is in cities.

"India, with its billion people, is a big area to get around," Burnes said in an interview on Wednesday. "This is a huge opportunity that we just haven't taken enough of."

"The market is in a very early stage of growth and all the dynamics here are in favour of the business growing."

Motorola has tied up with local distributor Bharti Teletech Ltd to increase its reach to around 15,000 points of sale from less than 6000.

"We can't do it ourselves. Bharti Teletech has a 25-year experience, and pretty much overnight, we will get access to that footprint," said Burnes, who backpacked across India in 1979.

Although he declined to give Motorola's market share in India, citing the quiet period ahead of earnings announcements, company chief executive Edward Zander had said in August it was in single digits.

In contrast, Nokia has more than half the exploding market where 34 million handsets are expected to be sold in 2005, up 62 percent from 2004.

No official figures are available for the US$2 billion sector, that is also home to players such as Samsung Electronics Co Ltd, LG ELectronics Inc and SonyEricsson.

The mobile services market is in the grips of soaring growth as carriers such as Bharti Tele-Ventures Ltd and state-run Bharat Sanchar Nigam Ltd expand furiously.

Less than a third of the country comes under the mobile footprint even a decade after mobile services were launched.

Burnes said he expected 200 million handsets to be sold in India over the next three years as mobile ownership was still below 7 percent compared with more than 28 percent in China.

Burnes, who will soon shift to India from Copenhagen, said Motorola would launch three candybar handsets -- C139, C257 and C261 -- within the next few weeks to augment its menu.

"We think these phones will be competitively priced in terms of the value that they bring to the customer."

Motorola will start assembling handsets in India by December, and is mulling full scale manufacturing of both phones and GSM equipment in the country.