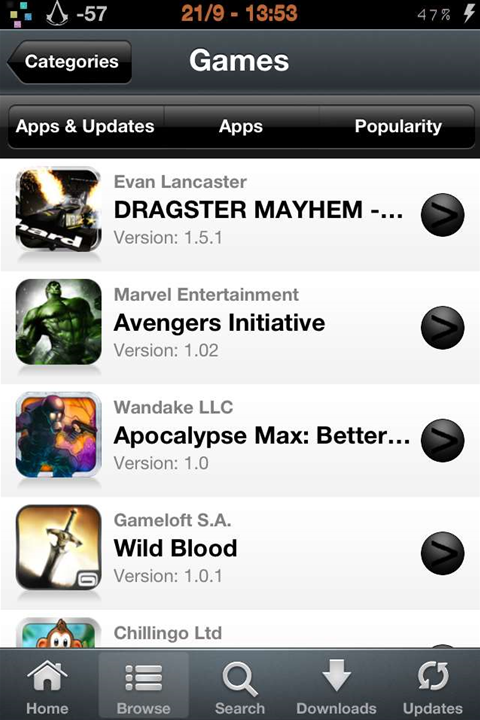 The iOS application community is under siege. Every popular application on Apple's app store has been cracked, their security mechanisms broken.

A special report by CRN sister site SC Magazine has revealed that within hours - at times mere minutes - of a paid app hitting Apple’s App store, it is available for free on alternative sites.

These pirate apps are lumped into a lesser known but prolific underground store App Trackr which brims with stolen wares.

This rampant piracy is the product of a global anonymous cracking scene that has operated publicly since at least 2008. Back then, cracking was fragmented, slower and limited to the technically savvy, who plied their trade using scripts and basic tools.

Today apps can be cracked, downloaded, shared and installed at the touch of a button using glossy applications that has opened piracy to the masses.

Of the current top 30 most popular iPhone apps in Australia last week, SC Magazine found that half were cracked and uploaded to App Trackr the same day they were released on Apple’s app store.

Eleven of the most expensive apps ranging between US$69.99 and US$999.99 were also cracked. One specialist dentistry app with a price tag of US$499.99 was cracked on the day it was released.

So prolific is the piracy that at least one developer has abandoned efforts to sell their app.

Czech-based MadFingerGames was left floored by what the developer said was “unbelievably high” levels of piracy of its $1.00 game Dead Trigger. The level of piracy was such that the developer has dropped the price tag altogether.

Italian developer Flippo Bigarella has similarly reported a whopping 92 percent piracy rate on his popular app Springtomize 2 for jailbroken devices. The app had some 200,000 installs.

App security vendor Axran, which ran a study on piracy earlier this year, cited KPMG figures that put the value of the app development industry at US$139.5 billion. The security vendor said more than 92 percent of paid iOS apps were pirated, and every paid Android app had been ripped off.

Apple has refused to discuss app piracy with SC.

The company was asked whether its application design could be hardened against reverse engineering efforts - central to the pirating of apps. With a multi-billion dollar industry at stake, the company has refused to respond.

What is known is that Cupertino has tried, and failed, to stop the piracy onslaught. Late last year – and possibly earlier – it attempted to tackle App Trackr by issuing take down notices.

At best, the effort increased the operating costs of the pirate machine, prompting developers to call for donations and place advertisements within the download process.

But the pirates inevitably prevailed, and even mocked Apple’s take down efforts.

In 2009, each of the three million pirates a day who wanted to access the then infamous piracy site Appulous had to answer questions known only to cracking scene insiders. One quiz took a stab at Apple lawyer Ian Ramage, the author of several take down requests:

“I work for Apple’s law firm and have been trying to get Appulous shut down since the beginning. I wish I was better at my job :( What’s my first and last name?”

By far the most popular method of accessing pirated Apple apps is through AppTrackr, and its related iOS application Installous.

Together, these tools allow users of jailbroken devices to download and install pirated apps.

Installous mimicks the design of Apple’s App store, lacking only user reviews and app price tags. Users can browse the most popular apps in a given category and download the warez from Bit Torrent or any number of file sharing websites. Those apps can then be installed.

The apps can then be uploaded from within the app to App Trackr or any file sharing site of a user's choosing.

Crackulous, based on the Clutch cracking utility, got around Apple’s Address Space Layout Randomisation and works by executing apps, which run decrypted, and dumping their code.

Attempts to mitigate this process have failed, Axran's report notes. App developers have applied traditional practices like simple code obfuscation, encryption, Security Development Lifecycle and app vulnerability testing, but none have helped against this type of reverse engineering.

“These approaches and tools continue to be relevant and important to avoid leaving flaws and holes in the apps (like buffer overflows and SQL injection) however, these approaches do not provide real-time integrity protection and security against tampering/reverse-engineering based attacks," the report noted.

“Vulnerability-free code can still be easily reverse-engineered and tampered resulting in the hacker compromising the integrity of the app.”

The company, which sells a product to secure apps, estimated that less than five percent of apps were secured against cracking.

“App owners are clearly far behind hackers in their understanding and sophistication around how easily apps can be compromised.”

Read on to page two: The hacking scene continues to flourish....