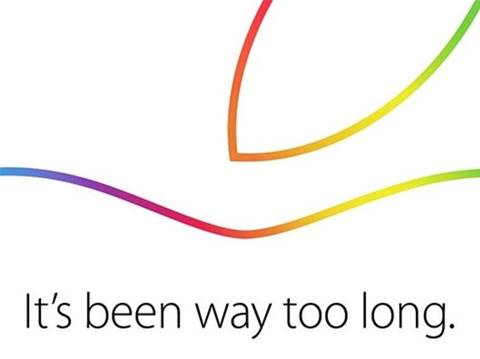 Stick it in your calendar: Apple's next event is 16 October.

Apple last month launched the iPhone 6 and iPhone 6 Plus, and revealed details of the Apple Watch, though it won't arrive until next year.

As usual, the invitation says little, with slogan: "it's been way too long." Feel free to pick that apart or ignore it as you choose.

Next week's event is expected to see updates to the iPad, iMac and MacBook lines, and may see the formal arrival of OS X Yosemite.

A report from 9to5Mac suggested Apple is working on iMacs with Retina displays, noting the Yosemite beta includes references to resolutions up to 6400x3600.

The iPad Air 2, meanwhile, is expected to come with an anti-reflective coating.

A report from Re/code last week suggested this event will be less glitzy than the iPhone 6 launch, which included a performance by U2. There will be an event in San Francisco as well as a European one in Berlin, held at the Apple Store on Kurfurstendamm, if you're in the neighbourhood.