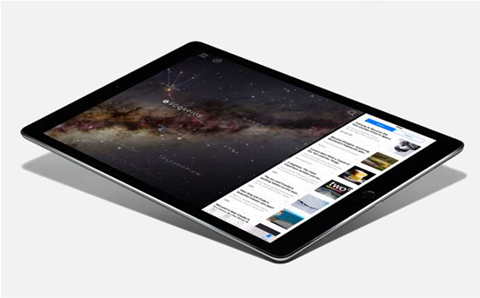 Apple this week launched the iPad Pro, which will compete head to head with Microsoft’s Surface Pro 3.

CRN spoke to Australian resellers about the new device and whether Cupertino's tablet giant can overtake Microsoft’s early lead in the enterprise hybrid market.

Melbourne-based Technetics, which is both an Apple Consultant Network partner and Microsoft Gold Partner, has seen a lot of business buyers shift towards Apple hardware.

“It’s definitely the first serious rival to the Surface, hands down. Apple have really produced an answer. If it can emulate the Surface’s functionality, it will be very hard to push aside.

“It’s great to have this healthy competition again. Back when Microsoft only built operating systems, they became complacent," added Tasevski.

“Something the iPad does well is integrated 3G or 4G. It’s a real bugbear the Surface doesn’t have one, where the iPad is a true mobile device. This will be great for organisations who are relying on quick access to emails."

Another Melbourne reseller, Source Central Partners, also resells both Apple and Microsoft solutions. General manager John Menagh sees a huge opportunity for the iPad Pro in the education market, where BYOD is prevalent.

"We as a team looked at it and to a man, were very impressed by it,” said Menagh.

“We’ve always liked iPads and we get a lot in for education. The limitation has often been screen size and how interactive it is. [iPad Pro] is a good size, has a faster processor, and I really like the smart keyboard.

"This is now starting to be a hard hitting competitor to the Surface, and I wouldn’t be surprised if we start seeing more execs with these in the Qantas lounge," added Menagh.

“iPads have been successful [in education] for the early years, but as requirements go up, the expectations for users from years’ 10 to 12 go up and they feel they need to move to a full-blown laptop. This device could carry you through to education. Yes, it still has iOS 9, but it’s got some real grunt to it. It’s not just a big iPod.

“We’ve taken the Surface to schools and corporate environments and it’s just not as sexy as an iPad. It has fantastic qualities, it’s just not as well received. Whether that’s from people in the cult of Apple or not, [iPad Pro] just has a very high level of functionality. This may even compete with Chromebook," he said.

In 2012, Complete PC Solutions’ Apple reseller contract was terminated, along with 200 other local resellers. The Melbourne-based company now sells alternatives to both Apple and Microsoft, including HP’s Elite x2 1011 2-in-1 tablet and ElitePad 1000.

Managing director Frank Triantafyllou thinks Apple might have bitten off more than it can chew with the iPad Pro.

"I don’t really see a market for it because everyone bought iPads three years ago,” said Triantafyllou. “I’ll be surprised if it takes off in the enterprise world now that everyone is embracing the Surface and other Windows devices.

"Now that there’s Surface in particular, I think they’ll just keep buying that. It’s not about the hardware, it’s about the OS and IT managers get quite disgruntled having iPads thrown at them. iPad was big three years ago because that’s all there was."

ASI Solutions’ general manager Nathan Lowe thinks Apple might be killing off its own Macbook line now that Apple is selling its own keyboard for the iPad Pro. The Sydney-based company is also an Apple and Microsoft reseller.

"Now that it’s got more functionality, proper USB connections and a stylus, I can definitely see a space for it, and that’s where Microsoft is,” said Lowe.

“You’ve got to wonder whether their cannibalizing Macbook though. We’ll just have to wait and see about a price point before we can tell if there’s going to be a high take up."

What do you think? Has Apple got it right or will the iPad Pro be a fizzler? Leave your comments below