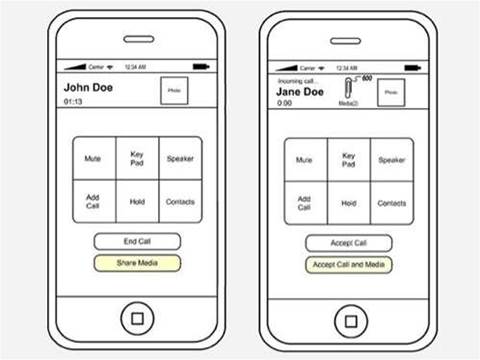 Apple has filed a patent to let people share files with the person they are talking to, perhaps as a new feature for this year's forthcoming iPhone 5. Good news for those who believe a picture's worth a thousand words, less so for your data bills of the future.

The "binding protocol", as it’s futuristically named in the patent uncovered by Patently Apple, allows you to send files – photos, videos, documents and so on – to the person you're speaking with using your data connection.

That means you could line up those drunken photos of your mate throwing up on his boss, so when you call to remind him of his office party antics they’re waiting for him to download on his iPhone 5. He'd have the option to “accept call and media” or to pick up first and download the incriminating evidence later. You could even leave files for download in a visual voicemail. It'd be like being haunted 24/7 by your Facebook wall. Eek.

Before you torch your iPhone, consider the more serious benefits – you could share spreadsheets during a work calls or login to online banking while chatting to your bank's customer service rep. More serious still, it could lead to a revival of the dreaded Bluetooth headset look as self-important business types multitask away on the train.

File-sharing could be with us later this year, October specifically according to Japanese website Macotakara, when Apple unleashes the smartphone we've all been waiting for. Best stock up on those Bluetooth headsets now, eh?

According to previous rumours, the iPhone 5 is tipped to arrive sporting a quad-core A6 processor with a 4in retina display as well as iWallet NFC capability.

This article originally appeared at Stuff.tv.