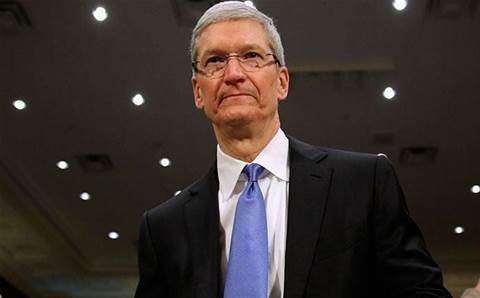 But amid questioning from a Wall Street analyst, Cook continued to avoid acknowledgment that increased iPhone prices may be at least partly to blame, as many analysts have contended.

During a conference call with analysts on Tuesday, Cook also highlighted quarterly growth in all of the company's other segments, including Mac, iPad, wearables and services.

"In fact, outside of iPhone, our business grew strongly, by 19 percent," Cook said.

In early January, Apple initially disclosed that iPhone sales for its first quarter of fiscal 2019, ended 29 December, had come in well below expectations. That led the company to slash its quarterly revenue guidance to US$84 billion—from a previous range of between US$89 billion and US$93 billion.

On Tuesday, Apple announced a final number of US$84.31 billion for its first-quarter revenue—for a drop of 4.5 percent from US$88.29 billion during the same period a year ago.

As expected, the revenue slide came from the iPhone business. Apple reported that iPhone revenue for the first fiscal quarter plummeted 14.9 percent to US$51.98 billion, down from US$61.1 billion during the same quarter a year earlier.

In Apple's news release on the quarterly results Tuesday, Cook acknowledged that it "was disappointing to miss our revenue guidance." Poor iPhone demand in China accounted for much of the drop, though a slow pace of iPhone upgrades in developed markets was also a problem, according to Cook.

"Our customers are holding onto their older iPhones a bit longer than in the past," Cook said during the call with analysts on Tuesday, due in part to Apple's own iPhone battery replacement program.

However, after being asked by analyst Steve Milunovich of Wolfe Research whether Apple now believes the iPhone lineup may be priced “too high,” Cook said no.

For the prices of the latest iPhones—the iPhone XR, XS and XS Max—”there is actually a pretty small difference in the United States compared to last year," Cook said during the conference call.

Cook added, "I do think that price is a factor"—but only in the sense that foreign-exchange adjustments and a decline in carrier subsidies have made the new iPhones more expensive for some customers, he said.

Still, the current flagship, the iPhone XS Max, starts at $1799 in Australia, and that makes it $330 more expensive than Apple’s flagship from just two years earlier, the iPhone 7 Plus.

Starting with the refresh in late 2016, the MacBook Pro has "really crept up in price" compared to what it used to cost, Zigmont noted. The current 13-inch MacBook Pro with Touch Bar has a starting price of $2699, whereas the version of the MacBook Pro prior to the refresh had started at $1899.

Mac sales have not been a problem of late for Apple, though. Cook called it the "best quarter ever for Mac revenue," driven by recent refreshes to the MacBook Air and Mac Mini.

The two long-neglected members of the Mac family received updates that were released in early November. And last July, Apple had updated the MacBook Pro with Touch Bar, improving its performance, keyboard and display.

For Apple's fiscal first quarter, Mac revenue reached US$7.42 billion, up 8.8 percent from US$6.82 billion the same period a year earlier.

Meanwhile, Apple reported that iPad sales were strong during the year-end quarter, as well. Sales of iPad jumped 16.8 percent, to reach US$6.73 billion during the quarter, up from US$5.76 billion a year ago. Cook called it the "highest growth rate in almost six years" for iPad.

Apple's refresh for both sizes of the iPad Pro, launched in early November, drove the latest iPad results, Cook said.

In addition, Apple disclosed major growth in both of its other segments—

• Wearables, Home and Accessories—which includes the Apple Watch and HomePod smart speaker—rose 33.4 percent to reach US$7.31 billion in revenue for the quarter, compared to US$5.48 billion a year earlier

Overall, Apple not only beat Wall Street expectations of US$83.97 billion in first-quarter revenue, but the company's earnings of US$4.18 per diluted share beat Wall Street estimates by a penny. Net income for the quarter came in at US$19.97 billion, compared to US$20.07 billion a year earlier.