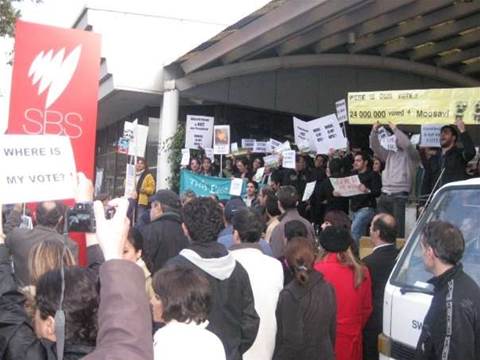 Unsatisfied with state-run television and international media coverage of the election result, followers of Twitter streams "Iranelection" and "change_for_iran" have sent messages and uploaded pictures and videos of the violence from inside the country.

"stevenxxxxxxRT @xxxxxxxx writes: To world press in Tehran: People have died tonight [...]. Don't let them die in the dark (via@natachaqs) #iranelectionless than 20 seconds ago from TweetDeck"

"Wordsxxxx RT @Roxxxxx ANY DOCTORS on Twitter?...need med. help at Tehran Uni but can't leave. Advice via Twitt (no malpractice promise) #iranelectionless than 20 seconds ago from web"

The protesters are disputing the result of Friday's election, in which incumbent hardline President Mahmoud Ahmadinejad was re-elected to a further four years in office.

Over the weekend, violent protests emerged on the capital Tehran's streets and spread across country after Ahmadinejad's opponent reformer Mir Hossein Mousavi accused the government of election fraud.

As dissent grew on the streets, media and Twitter reports said mobile phone communication in Iran was jammed and internet access was blocked or slow. It is also reported that electricity has been cut.

But determined to get their message out, online protesters within Iran are constantly uploading information about open proxies which avoid the government filters to their twitter feeds.

Meanwhile, much of the online discussion from both inside and outside of Iran has been anger towards the lack of coverage from the international media.

Protesters accuse CNN of providing inadequate coverage of the events and have set up a Twitter feed over the weekend called CNNfail.

According to the New York Times, CNN responded to complaints and was quoted in a statement as saying: "We share people's expectations of CNN and have delivered far more coverage of the Iranian election and aftermath than any other network."

CNN and several news agencies are on the streets of Tehran in the danger zone.

A reporter in Tehran from ABC's AM program today said that journalist visas were not being extended and the regime was waiting for reporters to leave the country.

Tens of thousands of Ahmadinejad's followers gathered in support of President-elect yesterday in a mass rally.

Reports of reformers gathering to rally this coming afternoon (Iranian time) are currently spreading on Twitter.

Grow your software revenue by selling these 5 affordable, essential tools for the modern workplace
By Negar Salek
Jun 17 2009
11:54AM