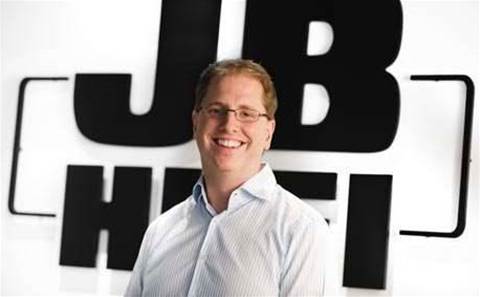 JB Hi-Fi CEO Terry Smart has announced plans to retire in August this year, with the architect of the retailer's commercial IT push Richard Murray announced today as the new boss.

Smart had been with JB Hi-Fi for 14 years and has seen the company grow from 10 to 182 stores during that time. He will retire with a golden handshake of $1.29 million.

"After a total of nearly 30 years in retail I now look forward to spending some more time with my family," said Smart.

As CFO, Murray has been a key driver for JB Hi-Fi's Commercial division, which has seen the company develop into a serious channel player in the education sector. JB Hi-Fi said in a statement to the ASX that by the end of the current financial year the Commercial division will have quadrupled its revenue in just three years.

"We have many opportunities to grow the business as we continue the store roll out, expand JB Hi-Fi Home, further develop our online and digital platforms and build our commercial and education division," said Murray.

After acquiring integrator Network Neighbourhood and its contract with the Victorian government, Murray told CRN earlier this year that expansion in that field is on the horizon.

"Governments are resource-constrained, IT is a massive part of all schools' budgets and they are trying to stretch that further, that’s why BYOD is a huge opportunity going forward," Murray told CRN at the time.

"New South Wales and Queensland are considering the same sort of programs and we are helping them work through the best way to structure these."

Group financial controller Nick Wells will be appointed the new CFO, having joined from Deloitte in 2009. Last week, a report named the retail giant as having the best corporate reputation among customers in Australia.