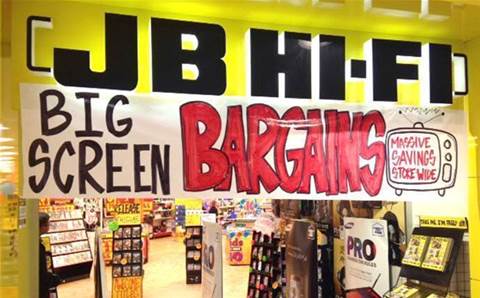 JB Hi-Fi added another $1 billion to its annual revenue in the 2018 financial year as hardware sales offset a decline in software sales and lower-than-expected home appliance sales.

Online hardware sales, which includes JB Hi-Fi’s communications, computers, audio, video game hardware and drones categories, grew 32 percent to $209 million, and accounts for 4.6 percent of total sales. Total hardware sales came in at $4.54 billion for the period, up 9.4 percent from 2017.

Music, movies and video game sales as a whole were down 8.5 percent for the period, and now accounts for 10 percent of total sales, compared to 12 percent last year.

Commercial and education solutions business JB Hi-Fi Solutions also contributed to the revenue growth, saying that it is on track to reach its $500 million per year sales target through organic growth and strategic acquisitions.

“We are pleased to have delivered another year of record sales and earnings in FY18,” JB Hi-Fi group chief executive Richard Murray said.

“It was another strong result for the JB Hi-Fi business in Australia, as we continue to delight our customers and deliver on our strategic objectives.”

He added that while The Good Guys business had a “challenging” second half due to weak home appliances sales, there was “strong” progress towards the company’s key initiatives to position itself for future growth.

The business however still posted $2.1 billion in revenue and $60.9 million in profits, excluding acquisition costs.

“We continued to take a considered and deliberate approach to change at The Good Guys,” Murray said. “Despite the challenging conditions in the home appliances market in the second half, we remained focused on sales and market share.”

The support office teams of JB Hi-Fi and The Good Guys will also be merged in the company’s Southbank, Melbourne office by April 2019.

For the next financial year, JB Hi-Fi group anticipates that revenue will break the $7 billion mark, and is expecting to open five new JB Hi-fi and two The Good Guys stores in Australia.